Acadia (ACAD) Files an NDA for Its Rett Syndrome Candidate

Acadia Pharmaceuticals Inc. (ACAD - Free Report) announced that it has submitted a new drug application or NDA to the FDA seeking approval of its pipeline candidate, trofinetide, for the treatment of Rett syndrome in adults and pediatric patients aged two years and above.

The regulatory filing was based on data from the pivotal phase III Lavender study, which evaluated the safety and efficacy of trofinetide versus placebo for treating Rett syndrome in girls and young women aged five to 20 years.

Rett syndrome is a rare neurological disorder for girls aged between five and 20 years.

Shares of Acadia have lost 35.7% so far this year compared with the industry’s decrease of 20.5%. 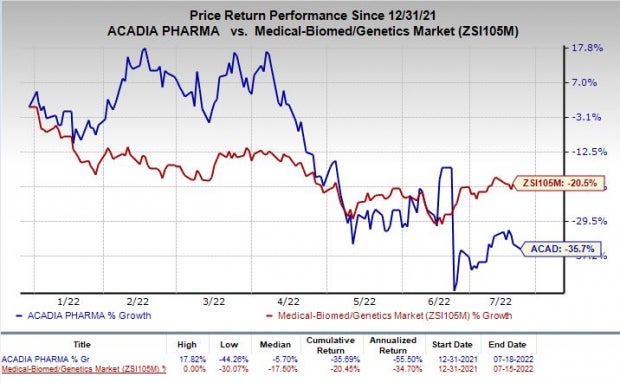 The study met its co-primary endpoints by demonstrating statistically significant improvement over placebo in the Rett syndrome behavior questionnaire and the clinical global impression of progress at 12 weeks.

Also, treatment with trofinetide led to statistically significant improvement versus placebo in CSBS-DP-IT–Social, caregiver scale of ability to communicate  — a key secondary endpoint.

In 2018, ACADIA entered into a license agreement with Australian biopharmaceutical company, Neuren Pharmaceuticals Limited, and obtained exclusive North American rights to develop and commercialize trofinetide for Rett syndrome and other indications.

If approved, trofinetide can become the second approved drug in Acadia’s portfolio of marketed drugs. Upon potential approval, trofinetide can lend a significant boost to the company and lower its sole dependence on Nuplazid (pimavanserin) for revenues.

Currently, Acadia’s top line solely comprises sales of its only marketed drug, Nuplazid, in the United States. The drug is approved for the treatment of hallucinations and delusions associated with Parkinson’s disease psychosis.

Earlier, the FDA had asked the committee for advice and recommendations regarding the evidence that pimavanserin is effective for the given indication. Though the FDA is not completely bound by the PDAC’s recommendations, it usually follows the same. The FDA’s decision date for the sNDA is Aug 4.

The FDA had issued a complete response letter to the sNDA for Nuplazid in April 2021.

Earnings of Anika Therapeutics have surpassed estimates in each of the trailing four quarters. ANIK delivered an earnings surprise of 200.45%, on average.

Earnings of Fate Therapeutics have surpassed estimates in two of the trailing four quarters and missed the same on the other two occasions. FATE delivered an earnings surprise of -0.72%, on average.

Earnings of Beam Therapeutics have surpassed estimates in three of the trailing four quarters and missed the same on the other occasion. BEAM delivered an earnings surprise of 1.80%, on average.

Incyte (INCY) Gets FDA Nod for Label Expansion of Opzelura