In August 2021, FDA issued a complete response letter to Sesen’s biologics license application (BLA) for Vicineum for treatment of NMIBC in its present form. After meeting with the FDA, Sesen decided to conduct an additional phase III study to support a potential resubmission of the BLA. Sesen has had four productive meetings with the FDA since August 2021

The decision to pause Vicineum’s development will allow Sesen to preserve cash while it explores potential strategic alternatives to maximize shareholder value. Sesen plans to find a partner for the development of Vicineum to fund costs for an additional phase III study

Sesen’s stock has declined 24.5% year to date compared with the industry’s fall of 20%. 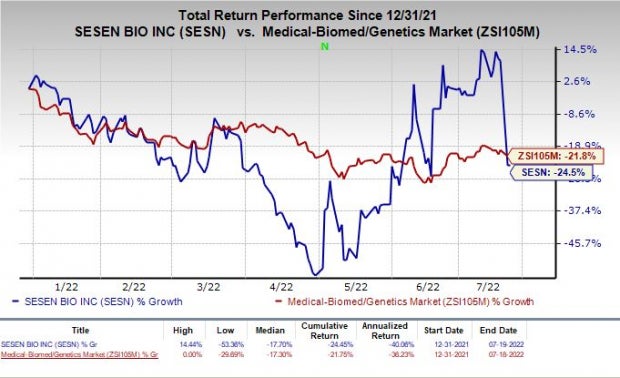 Sesen Bio announced the execution of an asset purchase agreement with Roche (RHHBY - Free Report) in a separate SEC filing.

Per the terms of the deal, Sesen Bio will sell all patent rights and knowledge associated with the monoclonal antibody EBI-031 legacy Interleukin-6 (IL-6) antagonist antibody technology to Roche for up to $70 million.

EBI-031 is a humanized monoclonal antibody that potently binds IL-6 and inhibits all known forms of IL-6 cytokine signaling. It is currently being developed by Roche as the potential treatment of ocular diseases.

In the original 2016 agreement, the biotech had licensed the antibodies, including EBI-031, which the FDA had cleared for clinical trials, to Roche, for an upfront payment of $7.5 million.

The execution of the new deal marks the end of Sesen’s 2016 licensing agreement with Roche, under which the former has already received $50 million in upfront and milestone payments.

The new deal includes an upfront payment of $40 million and an additional $30 million if Roche initiates a phase III study with EBI-031 before the end of 2026.

Some similar-ranked stocks in the same sector include BioNTech (BNTX - Free Report) and Seagen (SGEN - Free Report) , each carrying a Zacks Rank #2. You can see the complete list of today’s Zacks #1 (Strong Buy) Rank stocks here.

Earnings of BioNTech beat estimates in all of the trailing four quarters, the average surprise being 13.42%.

Earnings of Seagen missed estimates in two of the trailing four quarters and beat the same on the remaining two occasions, the average negative surprise being 40.08%.

Here's Why You Should Retain Chemed (CHE) Stock For Now