The Boston Beer Company, Inc. (SAM - Free Report) reported earnings per share of $4.31 in second-quarter 2022, down 9.3% year over year. Earnings per share also lagged the Zacks Consensus Estimate of $5.29. The dismal results were mainly due to a gross margin contraction, partly offset by increased revenues and lower operating expenses.

Net revenues improved 2.2% year over year to $616.2 million but missed the Zacks Consensus Estimate of $647.1 million. Excluding excise taxes, the top line rose 2.1% year over year to $655 million. Year-over-year growth was mainly driven by pricing and strength in Twisted Tea shipments. Lower-than-expected sales can be attributed to decline in shipment and a decrease in depletions in the quarter.

The shipment volume dropped 1.1% to 2.4 million barrels in the second quarter, driven by declines in the Truly Hard Seltzer, Samuel Adams, Angry Orchard, and Dogfish Head brands, partly negated by gains in its Twisted Tea and Hard Mountain Dew brands.

Depletions declined 7% in the second quarter on decreases in the Truly Hard Seltzer, Angry Orchard, Samuel Adams and Dogfish Head brands, offset by gains in the Twisted Tea and Mountain Dew brands. Excluding the Truly brand, the depletion volume for the company’s brands improved 14% in the reported quarter.

Depletions for the period (29 weeks) from the start of the year until Jul 16, 2022, declined 7% from that witnessed in the year-ago period. For the same period, shipments decreased 11%.

Shares of Boston Beer declined 9.6% in the after-hours trading session on Jul 21 on lower-than-expected top and bottom lines in the second quarter. The company’s lowered view for 2022 also disappointed investors. The Zacks Rank #5 (Strong Sell) stock has lost 6.2% in the past three months compared with the industry’s 5.3% decline. 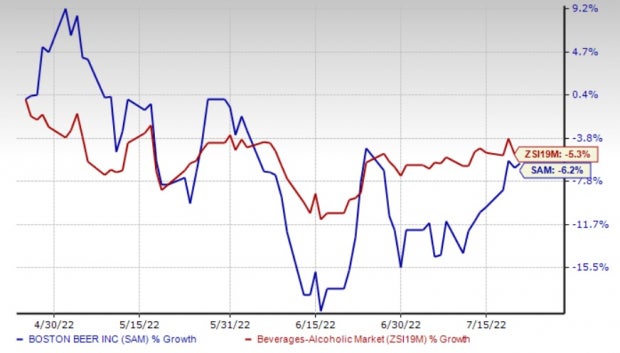 The gross profit declined 3.6% year over year to $265.8 million. The gross margin contracted 260 basis points to 43.1% from 45.7% in the year-ago quarter, owing to higher material costs, and elevated returns and scrap, partly negated by price increases.

Advertising, promotional and selling expenses were down 4.2% in the reported quarter to $154.9 million. The decline was driven by lower brand investments, particularly media costs, offset by higher freight to distributors, owing to higher freight rates.

General and administrative expenses increased 17.9% year over year to $38.8 million mainly due to a rise in external services provided to third parties, and increased salaries and benefits costs.

As of Jun 25, 2022, Boston Beer had cash and cash equivalents of $137.8 million, and total stockholders’ equity of $1,044 million. The company currently has $150 million in its line of credit, which, along with its cash position, will be sufficient to meet cash requirements.

For 2022, Boston Beer envisions adjusted earnings per share of $6.00-$11.00, excluding the impacts of ASU 2016-09. The revised guidance reflects a decline from earnings per share of $11.00-$16.00 mentioned earlier. The company’s earnings guidance is likely to be highly sensitive to changes in volume projections mainly related to the hard seltzer category, inflationary effects and the supply-chain performance.

Depletions and shipments are expected to decline 2-8% compared with an increase of 4-10% anticipated earlier. The lowered view mainly reflects changes in expectations for the Truly hard seltzer business and pushing back of the launch timing of Hard Mountain Dew to 2023 in some states. The company estimates depletions and shipments to include gains of 1-1.5 percentage points in 2022, and 4-6 percentage points in the fourth quarter due to the 53rd week. The company expects national price increases of 3-5%.

It anticipates a gross margin of 43-45% compared with 45-48% mentioned earlier. The lower guidance is the result of reduced volume expectations and the ongoing impacts of supply-chain headwinds. The company continues to expect to offset the impacts of higher commodity costs through price increases.

Investments in advertising, promotional and selling are expected to decline $30-50 million in 2022 compared with a flat to decline of $20 million mentioned earlier. The revised view reflects expectations of lowered volumes for 2022. The advertising, promotional and selling guidance does not assume any changes in freight costs for the shipment of products to its distributors. The non-GAAP effective tax rate is anticipated to be 26-27%, excluding the impacts of ASU 2016-09. This compares with the prior non-GAAP effective tax rate estimate of 26%.

Duckhorn currently flaunts a Zacks Rank #1 (Strong Buy) and an expected long-term earnings growth rate of 12.2%. NAPA has a trailing four-quarter earnings surprise of 94.4%, on average. The company has declined 3.6% in the past three months.

The Zacks Consensus Estimate for Duckhorn’s current financial-year sales and earnings per share suggests growth of 10.8% and 6.9%, respectively, from the year-ago reported numbers. The consensus mark for NAPA’s earnings per share has been unchanged in the past 30 days.

Coca-Cola FEMSA currently has a Zacks Rank of 2 (Buy). KOF has a trailing four-quarter earnings surprise of 15.6%, on average. It has a long-term earnings growth rate of 6.6%. The company has declined 3.3% in the past three months.

The Zacks Consensus Estimate for Coca-Cola FEMSA’s current financial-year sales suggests growth of 5.1% from the prior-year reported number, whereas the same for earnings suggests a decline of 15.2%. The consensus mark for KOF’s earnings per share has moved up 1% in the past seven days.

Brown-Forman currently has a Zacks Rank #2. BF.B has a trailing two-quarter earnings surprise of 8.1%, on average. The company has gained 6.4% in the past three months.

The Zacks Consensus Estimate for Brown-Forman’s current financial-year sales and earnings per share suggests growth of 7.2% and 14.4%, respectively, from the year-ago reported numbers. The consensus mark for BF.B’s earnings per share has been unchanged in the past 30 days.