Sonoco Products Company (SON - Free Report) reported adjusted earnings per share (EPS) of $1.76 in second-quarter 2022, beating the Zacks Consensus Estimate of $1.67. The figure came within the company’s guidance of $1.60-$1.70. The bottom line improved 89% from the prior-year quarter’s levels, driven by strong strategic pricing performance across most of its businesses, the contribution from the Metal Packaging acquisition and productivity gains.

Including one-time items, the company reported EPS of $1.33, which compared favorably with the year-ago quarter’s loss per share of $3.34.

Sonoco’s net sales were a record $1.91 billion, which beat the Zacks Consensus Estimate of $1.87 billion. The top line surged 38% year over year, courtesy of strong pricing performance and sustained robust results from the Metal Packaging acquisition. However, the negative impact of foreign currency translation somewhat negated the gains.

Selling, general and administrative expenses amounted to $179 million, up 39% year over year.

Adjusted operating income was $250 million during the reported quarter compared with the prior-year quarter’s $141 million. Operating margin came in at 13.1%, up from the year-ago quarter’s 10.2%.

The Consumer Packaging segment’s net sales were up 66% year over year to a record $990 million due to the addition of the Metal Packaging acquisition. Operating profit amounted to $139 million, up 113% from the prior-year quarter’s levels, primarily owing to earnings added by Metal Packaging, solid price/cost performance and favorable productivity.

Net sales in the Industrial Paper Packaging segment were a record $727 million, reflecting year-over-year growth of 19% due to strong pricing performance, modestly offset by the negative impacts of foreign exchange and lower volume/mix. Operating profit totaled $94 million, another record for the segment, reflecting a 57% year-over-year improvement on a strong price/cost performance that was modestly offset by lower volume/mix. .

Sales for the All Other segment, which comprises protective, healthcare, retail and industrial plastics units, rose 11% year over year to $196 million. Operating profit for the segment totaled $17 million compared with the year-ago quarter’s $16 million. 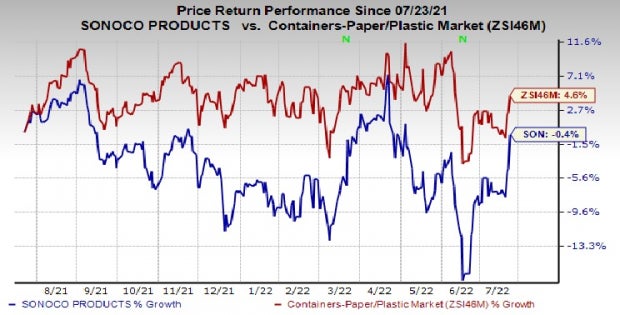 Sonoco’s shares have lost 0.4% in the past year against the industry’s growth of 4.6%.

Greif has an estimated earnings growth rate of 37% for the current year. In the past 60 days, the Zacks Consensus Estimate for current-year earnings has been revised upward by 17%.

Greif pulled off a trailing four-quarter earnings surprise of 22.9%, on average. The company’s shares have gained 14.7% in the past year.

Titan International has an estimated earnings growth rate of 165% for the current year. In the past 60 days, the Zacks Consensus Estimate for current-year earnings has been revised upward by 43%.

Titan International pulled off a trailing four-quarter earnings surprise of 56.4%, on average. The company’s shares have appreciated 114.7% in a year’s time.

RBC Bearings has an expected earnings growth rate of 48% for 2022. The Zacks Consensus Estimate for the current year’s earnings has moved up 6% in the past 60 days.

RBC Bearings has a trailing four-quarter earnings surprise of 3.4%, on average. ROLL’s shares have moved up 7.4% in the past year.