Vale (VALE) to Report Q2 Earnings: What's in the Cards?

The Zacks Consensus Estimate for Vale’s second-quarter total sales is pegged at $13.07 billion, indicating a decline of 21.6% from the year-ago quarter. The consensus mark for earnings has moved south by 13% to 96 cents over the past seven days. The figure suggests a slump of 39.6% from the prior-year quarter.

Vale’s first-quarter earnings per share and revenues both came in lower than the year-ago quarter. The company missed the Zacks Consensus Estimate on both metrics. While the company missed the earnings estimates in the last reported quarter, it has surpassed the same in three of the trailing four quarters, the average surprise being 17.1%.

Vale recently provided second-quarter 2022 production update, which offers a sneak peek as to how the company is likely to fare in the to-be-reported quarter. Iron ore production was around 74.1 million tons in the second quarter of 2022, down 1.2% year over year but up 17% sequentially. Improvement at Southeastern Systems (mainly attributable to Brucutu, Itabira and Timbopeba) and upbeat performances in all operations at Southern Systems, particularly at Vargem Grande and Mutuca, led to the higher production numbers in the quarter to be reported. Northern System production improved, benefiting from better weather seasonality in June despite headwinds.

Sales volumes of iron ore fines and pellets were 73.2 Mt in the quarter, flat year on year. It highlights a 23% growth from the first quarter of 2022. Iron accounts for around 80% of Vale’s revenues. Iron ore prices had lost steam through the second quarter due to recurring COVID-19 outbreaks and mounting fears about a potential global recession-induced demand downturn. This is likely to get reflected in Vale’s second-quarter results.

Copper production for the quarter was down 24% year over year to 55.9 kt in the quarter. Copper output was down 1.2% sequentially due to planned and corrective maintenance at the Salobo plant that negated the impact of the Sossego SAG mill resumption in early June and the stronger performance of Canadian mines. Vale sold 51.5 kt of copper, which reflects a 31% decline from the last-year quarter. Over the course of the second quarter, a series of factors, including concerns about the global economy, weak demand in China, and higher U.S interest rates, led to a downward trend in nickel and copper prices as well. Reduced output of these metals, as well as lower metal prices, might have impacted VALE’s top-line performance in the second quarter.

Vale has been facing higher input costs, particularly diesel and freight costs, which are likely to have weighed on its margins in the quarter to be reported. However, the company’s cost control efforts may have negated some of this impact.

Our proven model doesn’t conclusively predict an earnings beat for Vale this time around. The combination of a positive Earnings ESP and a Zacks Rank #1 (Strong Buy), 2 (Buy) or 3 (Hold) increases the chances of beating estimates. You can uncover the best stocks to buy or sell before they’re reported with our Earnings ESP Filter.

Zacks Rank: The company currently has a Zacks Rank #3. You can see the complete list of today’s Zacks #1 Rank stocks here. 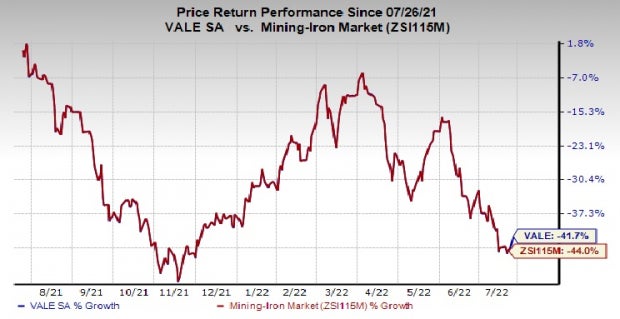 Here are some Basic Materials stocks which you may consider, as our model shows that these have the right combination of elements to post an earnings beat in their upcoming releases.

The Zacks Consensus Estimate for NGVT’s second-quarter earnings has moved up 2% over the past 30 days. The consensus estimate for Ingevity’s earnings for the second quarter is pegged at $1.68.

Albemarle Corporation (ALB - Free Report) , scheduled to release earnings on Aug 3, has an Earnings ESP of +11.87% and a Zacks Rank #2.

The Zacks Consensus Estimate for Albemarle's second-quarter earnings has been revised 5% upward over the past 30 days. The consensus estimate for ALB’s earnings for the quarter is currently pegged at $2.93.