Celanese (CE) to Report Q2 Earnings: What's in the Offing?

Celanese Corporation (CE - Free Report) is set to release second-quarter 2022 results, after market close on Jul 28. Benefits from productivity actions, project investment, higher demand and strategic acquisitions are likely to get reflected in second-quarter performance. However, the company is likely to have faced headwinds from higher input costs.

Celanese’s shares have declined 25.2% in the past year compared with a 19.4% fall of the industry. 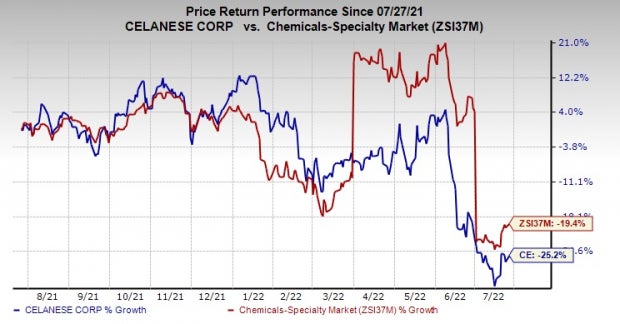 Our proven model predicts an earnings beat for Celanese this season. The combination of a positive Earnings ESP and a Zacks Rank #1 (Strong Buy), 2 (Buy) or 3 (Hold) increases the chances of an earnings beat.

Earnings ESP: Earnings ESP for Celanese is 0.89%. The Zacks Consensus Estimate for second-quarter earnings is currently pegged at $4.58. You can uncover the best stocks to buy or sell before they’re reported with our Earnings ESP Filter.

The Zacks Consensus Estimate for Celanese’s revenues in the to-be-reported quarter is pegged at $2,469 million, suggesting a year-over-year increase of 12.3%.

The consensus mark for second-quarter net sales in the Engineered Materials unit is currently pegged at $826 million, which calls for a 21.1% increase year over year. The same for the Acetyl Chain segment is pinned at $1,519 million, calling for a 7.8% year-over-year rise.

The Zacks Consensus Estimate for the Acetate Tow division is pegged at $130 million, which indicates a 5.7% decline year over year.

Factors at Play in Q2

Celanese is likely to have gained from its productivity actions, investments in high-return organic projects and strategic acquisitions in the quarter to be reported. The company is also expected to have benefited from higher demand in most of its end markets.

The company continues to actively pursue acquisitions, which are providing opportunities for additional growth, investment and synergies. Benefits of acquisitions are also expected to get reflected in its second-quarter performance.

Celanese also remains focused on executing its productivity programs that include the implementation of a number of cost reduction capital projects. Productivity and price-increase actions are expected to have supported its margins in the second quarter.

Here are some companies in the basic materials space you may want to consider, as our model shows these have the right combination of elements to post an earnings beat this quarter:

Albemarle Corporation (ALB - Free Report) , scheduled to release earnings on Aug 3, has an Earnings ESP of +11.9% and carries a Zacks Rank #2. You can see the complete list of today’s Zacks #1 Rank stocks here.

The Zacks Consensus Estimate for Albemarle’s second-quarter earnings has been revised 21.5% upward in the past 60 days. The consensus estimate for ALB’s earnings for the quarter is currently pegged at $2.94.

Cabot Corporation (CBT - Free Report) , slated to release earnings on Aug 8, has an Earnings ESP of +0.16% and sports a Zacks Rank #1.

The consensus estimate for Cabot’s fiscal third-quarter earnings has been revised 1% upward in the past 60 days. The Zacks Consensus Estimate for CBT’s earnings for the quarter is pegged at $1.53.

The consensus estimate for Tronox’s second-quarter earnings has been revised 0.6% upward in the past 60 days. The Zacks Consensus Estimate for TROX’s earnings for the quarter is pegged at 84 cents.

ArcelorMittal (MT) Gears Up for Q2 Earnings: What's in Store?