Barring one-time items, adjusted earnings in the reported quarter were $2.41 per share, which lagged the Zacks Consensus Estimate of $2.81.

Sherwin-Williams posted revenues of $5,872.3 million, up around 9% year over year. The figure, however, missed the Zacks Consensus Estimate of $5,989.9 million. The upside was driven by higher selling prices in all segments, increased professional architectural sales volumes in North America paint stores and volume gains in packaging and coil businesses. These were partly masked by lower protective and marine sales volume in North America paint stores and reduced volumes outside of North America in Consumer Brands and Performance Coatings Groups.

The company witnessed strong demand in the second quarter across the Americas Group and the Performance Coatings Group segments. Professional architectural demand strengthened during the quarter in The Americas Group unit while demand in Performance Coatings Group remained strong through the quarter in North America. However, these were offset by weaker North American DIY demand, deteriorating demand in Europe and lack of meaningful recovery in China following the lifting of pandemic-led lockdowns.

The Americas Group segment registered net sales of $3,343.1 million in the second quarter, up around 8% year over year. The upside was mainly owing to higher selling prices and increased professional architectural sales volume in North America paint stores, which more than offset lower sales volumes in protective and marine and DIY end markets.

Net sales in the Consumer Brands Group segment ticked up 0.9% year over year to $737.9 million. Higher selling prices in all regions were partly offset by reduced sales volume outside of North America.

Net sales in the Performance Coatings Group rose roughly 15% year over year to around $1,790.3 million in the reported quarter. The upside was mainly driven by increased sales in most end markets, mainly driven by selling price increases and sales volume growth in packaging and coil businesses. These were partly offset by reduced sales volume outside of North America.

At the end of the second quarter, Sherwin-Williams had cash and cash equivalents of $312.6 million, up 42% year over year. Long-term debt increased around 14% year over year to $8,593.6 million.

The company generated $639.7 million in net operating cash during the first half of 2022.

Sherwin-Williams also repurchased 2.55 million shares of its common stock during the first half.

The company expects consolidated net sales to increase low to mid-teens percentage year over year in the third quarter. For 2022, it is projected to increase high-single digit to low-double digit percentage.

The company also now expects adjusted earnings per share for 2022 to be in the range of $8.50-$8.80, down from $9.25-$9.65 expected earlier. The downward revision is based on the weaker-than-expected second-quarter results, demand pressures in Europe, China and North American DIY, and inflationary pressures.

Shares of Sherwin-Williams have declined 11.6% in the past year compared with 8.8% decline of the industry. 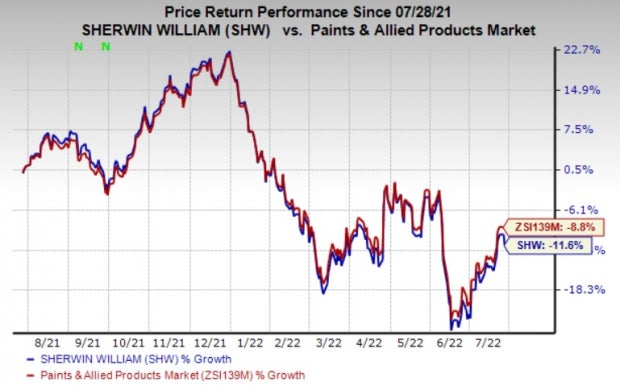 Cabot’s earnings beat the Zacks Consensus Estimate in each of the trailing four quarters, the average being 16.2%. CBT has gained around 30% over a year.

ATI, currently sporting a Zacks Rank #1, has a projected earnings growth rate of 1,069.2% for the current year. The Zacks Consensus Estimate for ATI's current-year earnings has been revised 12.5% upward in the past 60 days.

ATI’s earnings beat the Zacks Consensus Estimate in the last four quarters. It has a trailing four-quarter earnings surprise of roughly 128.9%, on average. ATI shares are up around 15% in a year.

Albemarle has a projected earnings growth rate of 241.8% for the current year. The Zacks Consensus Estimate for ALB’s current-year earnings has been revised 18% upward in the past 60 days.

Albemarle’s earnings beat the Zacks Consensus Estimate in each of the trailing four quarters, the average being 20%. ALB has gained roughly 19% in a year. The company flaunts a Zacks Rank #2 (Buy).