Volkswagen AG (VWAGY - Free Report) recently announced that it has started production of its all-electric ID.4 SUV at its manufacturing facility in Chattanooga, TN. This makes the ID.4 the first Volkswagen EV to be built and sold in the United States. Chattanooga now becomes part of Volkswagen’s five other sites around the globe that currently manufacture EVs. Deliveries of ID.4s are likely to commence in early October.

Volkswagen had first begun production of the ID.4 in late 2020 as the company’s first all-electric crossover SUV. The vehicle has been known to be the EV that caters to the masses instead of the high-end customers and it has garnered the attention of several consumers throughout Europe, North America and China. To date, its deliveries have reached 190,000 units globally.

The vehicle first went on sale in the United States for the 2021 model year. However, it had remained an import vehicle for people in North America as Volkswagen previously did not manufacture any EVs in the United States despite possessing a sprawling manufacturing facility in Tennessee. The U.S.-built 2023 ID.4 model will be slightly different from its European counterpart. There will be a revision in the center console, and the battery and certain materials will be procured from U.S.-based suppliers.

During the first half of 2022, VWAGY sold just 4415 ID.4s in the country. But it envisions upscaling production to a whopping 7000 cars per month by the end of the year. Volkswagen currently employs more than 4,000 people in Chattanooga. With production having already started, it is in the process of hiring more than 1,000 new personnel this year, thereby contributing to the economic development of the nation.

Plans are also underway to launch an entry-level model by the end of the year with a lower base price. Pricing for the 2023 ID.4 models will be released next week.

The Chattanooga plant already has an existing electrification factory with an investment of $800 million to aid electrification and battery pack production. The recent development will push the plant to prominence. Moreover, recently, Volkswagen of America opened its Battery Engineering Lab in Chattanooga to test batteries for EVs in the American marketplace. The company has invested $22 million in the sprawling facility, which will give it an edge in the electric mobility space.

Also, Volkswagen has pledged $7.1 billion investment to boost its product portfolio, R&D and manufacturing capabilities in the North American region. The latest announcement marks a notable milestone for the company’s enterprising vision of electrification in the said region.

Volkswagen’s global ID. family of EVs continues to expand, and the vehicles are part of the company’s ACCELERATE strategy to reinforce EV adoption and aim for net-zero emissions and climate neutrality by 2050.

The auto magnate has been plagued by chip shortage and tight market conditions. Many of its electric vehicles have been challenged with software issues. Nonetheless, its bold electrification strides are likely to prepare the company for long-term momentum.

Shares of Volkswagen have declined 44.1% over the past year compared with its industry’s 27.8% fall. 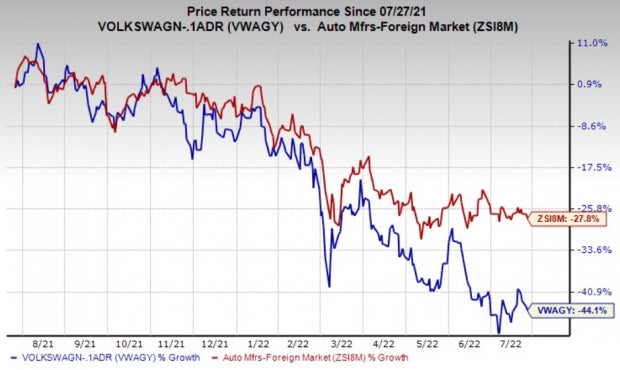 BRP has an expected earnings growth rate of 11.36% for 2023. The Zacks Consensus Estimate for current-year earnings has remained constant in the past 30 days.

BRP’s earnings beat the Zacks Consensus Estimate in all the trailing four quarters. DOOO pulled off a trailing four-quarter earnings surprise of 56.81%, on average. The stock has declined 13.5% over the past year.

LCI Industries has an expected earnings growth rate of 65.8% for the current year. The Zacks Consensus Estimate for current-year earnings has remained constant in the past 30 days.

LCI Industries’ earnings beat the Zacks Consensus Estimate in three of the trailing four quarters and missed in one. LCII pulled off a trailing four-quarter earnings surprise of 21.81%, on average. The stock has declined 10.1% in the past year.

Standard Motor has an expected earnings growth rate of 5.2% for the current year. The Zacks Consensus Estimate for current-year earnings has remained constant in the past 30 days.

Standard Motor’s earnings beat the Zacks Consensus Estimate in all the trailing four quarters. SMP pulled off a trailing four-quarter earnings surprise of 40.34%, on average. The stock has risen 6.6% over the past year.