Barring one-time items, adjusted earnings per share came in at 75 cents. The bottom line surpassed the Zacks Consensus Estimate of 57 cents per share.

The company generated revenues of $1,581.1 million, up 60.6% year over year. The top line surpassed the Zacks Consensus Estimate of $1,568 million.

Total cash from operating activities amounted to $633.3 million in the second quarter, up 51% year over year.

The forecast for capital expenditures for 2022 is roughly $1.4 billion.

Shares of Agnico Eagle have declined 39% in the past year compared with a 23.9% fall of the industry. 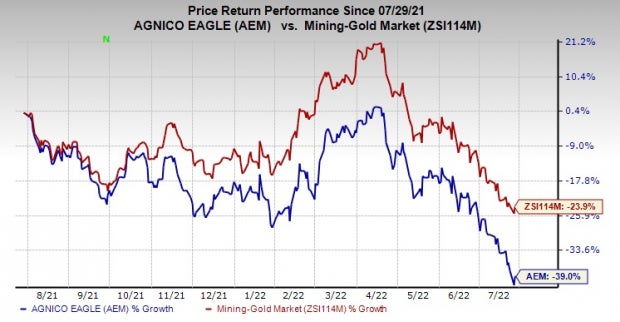 Albemarle has a projected earnings growth rate of 241.8% for the current year. The Zacks Consensus Estimate for ALB's current-year earnings has been revised 21.5% upward in the past 60 days.

Albemarle’s earnings beat the Zacks Consensus Estimate in each of the last four quarters. It has a trailing four-quarter earnings surprise of roughly 22.5%, on average. ALB has gained around 15.5% in a year and currently carries a Zacks Rank #2 (Buy). You can see the complete list of today’s Zacks #1 Rank stocks here.

Cabot’s earnings beat the Zacks Consensus Estimate in each of the trailing four quarters, the average being 16.2%. CBT has gained around 29.8% over a year.

Sociedad has a projected earnings growth rate of 431.7% for the current year. The Zacks Consensus Estimate for SQM’s current-year earnings has been revised 36.8% upward in the past 60 days.

Sociedad’s earnings beat the Zacks Consensus Estimate in two of the trailing four quarters, the average being 28.2%. SQM has gained 98% in a year. The company sports a Zacks Rank #1.