Celanese Corporation (CE - Free Report) logged earnings from continuing operations of $4.03 per share in second-quarter 2022, down from $4.81 in the year-ago quarter.

Barring one-time items, adjusted earnings were $4.99 per share, down from $5.02 in the year-ago quarter. It topped the Zacks Consensus Estimate of $4.57. Our estimate for the quarter was $4.51.

The company witnessed higher pricing on a sequential comparison basis in the reported quarter, which was partly offset by lower volumes and unfavorable currency swings. Pricing also increased year over year across all segments in the quarter.

Net sales in the Engineered Materials unit were $948 million in the first quarter, up 39% year over year. This compares to the consensus estimate of $827 million and our estimate of $732 million. The segment witnessed record net sales in the quarter on pricing and volume increase. Volumes rose 1% and pricing increased 6% sequentially.

The Acetyl Chain segment posted net sales of $1,456 million, up roughly 3% year over year. This compares to the consensus estimate of $1,367 million and our estimate of $1,747.2 million. The segment witnessed a 3% sequential decline in volume resulting from production losses at the Clear Lake facility due to supply disruptions from the two biggest external raw material suppliers to that site.

Net sales in the Acetate Tow segment were $119 million, down around 14% year over year. This compares to the consensus estimate of $123 million and our estimate of $132 million. The company witnessed stable pricing and a 6% decline in volume in the segment on a sequential-comparison basis.

Celanese generated an operating cash flow of $495 million and a free cash flow of $368 million in the second quarter. Capital expenditures amounted to $124 million.

The company also returned $74 million to shareholders through dividend payouts during the quarter.

Celanese sees adjusted earnings of $4-$4.50 per share for the third quarter with performance at the lower end of the range reflecting the potential for additional modest demand softening as it progresses through the quarter. It also expects to deliver 2022 adjusted earnings per share roughly in line with the year-ago level. The company said that it does not currently envision a sharp deterioration in demand.

Celanese’s shares have declined 23.1% in the past year compared with a 20.7% fall of the industry. 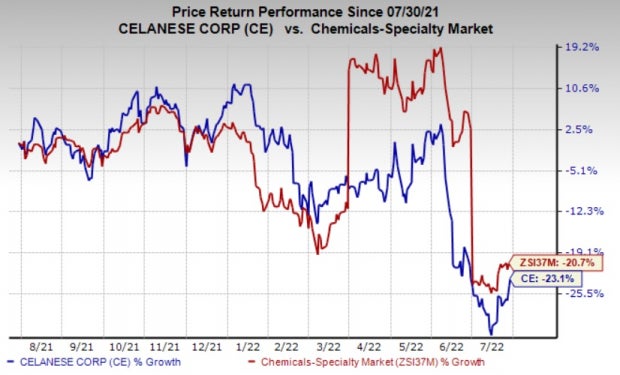 Cabot’s earnings beat the Zacks Consensus Estimate in each of the trailing four quarters, the average being 16.2%. CBT has gained around 33% over a year.

ATI, currently sporting a Zacks Rank #1, has a projected earnings growth rate of 1,069.2% for the current year. The Zacks Consensus Estimate for ATI's current-year earnings has been revised 12.5% upward in the past 60 days.

ATI’s earnings beat the Zacks Consensus Estimate in the last four quarters. It has a trailing four-quarter earnings surprise of roughly 128.9%, on average. ATI shares are up around 21% in a year.

Albemarle has a projected earnings growth rate of 241.8% for the current year. The Zacks Consensus Estimate for ALB’s current-year earnings has been revised 18% upward in the past 60 days.

Albemarle’s earnings beat the Zacks Consensus Estimate in each of the trailing four quarters, the average being 20%. ALB has gained roughly 15% in a year. The company flaunts a Zacks Rank #2 (Buy).