Although the company predicts the operating environment to be challenging in fiscal 2023, it remains confident in the resilience of its business and its ability to navigate through these headwinds. The company is confident about the long-term growth potential of the total beverage alcohol sector and expects to expand its value share by 50% in the sector to 6% by 2030.

The company notes that it is on track to deliver on its medium-term guidance for fiscal 2023-2025, wherein it targets organic sales growth of 5-7% and organic operating profit growth of 6-9%.

Diageo’s stock rose 2.6% yesterday, following the robust fiscal 2022 results and the upbeat view. Shares of the Zacks Rank #4 (Sell) company have lost 3.9% in the past year compared with the industry’s decline of 3.3%. 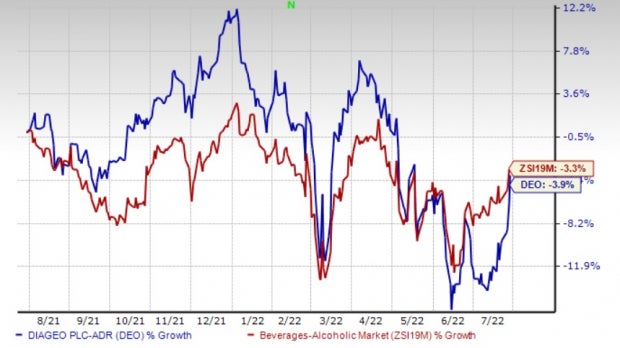 Organic sales benefited from the sustained recovery in the on-trade channel, strong consumer demand in the off-trade and market share gains. The company’s top line also gained from continued premiumization efforts and favorable industry trends, particularly in the spirits category, which expanded the share of the total beverage alcohol space.

The company delivered a positive price mix of 11.1% in fiscal 2022. Price/mix benefited from a positive mix due to the robust performance of super-premium-plus brands, particularly scotch, tequila and Chinese white spirits. Recovery in the on-trade channel in North America and Europe, and the partial recovery in Travel Retail also aided the company’s mix. This was partly offset by a negative market mix due to a higher contribution to net sales from India. Moreover, price contributed to mid-single-digit growth due to pricing actions across all regions.

The organic gross margin expanded 112 basis points (bps) in fiscal 2022, driven by the positive mix due to premiumization, a recovery in the on-trade channel and improved fixed cost absorption due to volume growth. Price increases and supply productivity savings more than offset the impact of cost inflation in the fiscal year. The company delivered £380 million of productivity savings in fiscal 2022, driven by COGS productivity and marketing effectiveness.

In fiscal 2022, Diageo delivered net cash from operating activities of £3.9 billion, marking a year-over-year increase of £0.3 billion. DEO reported a strong free cash flow of £2.8 million, down £0.3 billion from the last year’s level due to the lapping of strong working capital benefits in fiscal 2021.

Diageo remains committed to its disciplined approach to capital allocation primarily to enhance its shareholder value. DEO increased the final dividend 5% to 46.82 pence per share. This reflects its strong liquidity position and confidence in the long-term health of its business.

Fomento Economico Mexicano, alias FEMSA, currently sports a Zacks Rank of 1 (Strong Buy). FMX has a trailing four-quarter earnings surprise of 3.9%, on average. It has a long-term earnings growth rate of 8.8%. The company has declined 28.4% in the past year.

The Zacks Consensus Estimate for FEMSA’s current financial-year sales suggests growth of 11.3%, whereas earnings estimates indicate a decline of 3.8% from the prior-year reported number. The consensus mark for FMX’s earnings per share has moved up 3.6% in the past 30 days.

Duckhorn currently has a Zacks Rank #2 (Buy) and an expected long-term earnings growth rate of 12.2%. NAPA has a trailing four-quarter earnings surprise of 94.4%, on average. The company has declined 14.7% in the past year.

The Zacks Consensus Estimate for Duckhorn’s current financial-year sales and earnings per share suggests growth of 10.8% and 6.9%, respectively, from the year-ago reported numbers. The consensus mark for NAPA’s earnings per share has been unchanged in the past 30 days.

Brown-Forman currently carries a Zacks Rank #2. BF.B has a trailing four-quarter earnings surprise of 8.1%, on average. The company has risen 3.8% in the past year.

The Zacks Consensus Estimate for Brown-Forman’s current financial year’s sales and earnings per share suggests growth of 7.2% and 14.4%, respectively, from the year-ago reported numbers. The consensus mark for BF.B’s earnings per share has been unchanged in the past 30 days.