Ultragenyx’s total revenues of $89.34 million in the second quarter, up 2.7% year over year. The top line surpassed the Zacks Consensus Estimate of $89 million.

Shares of Ultragenyx have lost 38.3% in the year so far compared with the industry's decline of 18.1%. 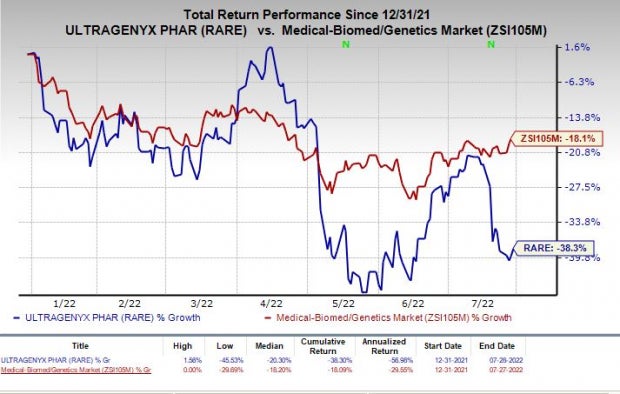 Crysvita’s total revenues were $69.4 million, up 40.1% year over year, driven by increased demand for approved indications. Crysvita revenues in Ultragenyx territories rose 43.3% to $64 million in the second quarter and included $51.6 million from the North America profit share territory and $12.4 million of net product sales for the drug in other regions. Total royalty revenues related to the sales of Crysvita in the European region were $5.4 million. Ultragenyx sold its Crysvita rights in the European territory to Royalty Pharma in December 2019.

Operating expenses increased 36% to $230.9 million in the second quarter due to pipeline advancements.

Ultragenyx reaffirmed the guidance it had provided earlier this year. The company expectsCrysvita revenues in the range of $250-$260 million in Ultragenyx territories. Dojolvi revenues are expected to be $55-$65 million

In May, Ultragenyx announced positive long-term safety and efficacy data from the phase I/II studies of its candidates DTC401 and DTC301 for the potential treatment of Glycogen Storage Disease Type Ia (GSDIa) and the potential treatment of Ornithine Transcarbamylase (OTC) deficiency, respectively. Results to date exhibited ongoing durability of both safety and response for both the gene therapy programs.

In April, Ultragenyx dosed the first patient in a pivotal phase II/III study evaluating its fully human monoclonal antibody, setrusumab (UX143), for the treatment of osteogenesis imperfecta (“OI”) in patients aged between five to less than 26 years.

In the second half of 2022, the company expects to provide a dosing update on the phase II portion of the Orbit study and transition to phase III.

Ultragenyx recently sold 30% of the royalty interests it receives from partner Kyowa Kirin on future sales of its rare disease drug, Crysvita, in the United States and Canada. In return, RARE will receive $500 million without diluting capital. This money will be used by Ultragenyx to fund its ongoing clinical studies as well as planned commercial activities.

Some better-ranked stocks in the biotech sector is BioNTech (BNTX - Free Report) and Scholar Rock (SRRK - Free Report) , each carrying a Zacks Rank #2 (Buy) at present. You can see the complete list of today’s Zacks #1 Rank (Strong Buy) stocks here.

Scholar Rock’s loss estimates for 2022 have narrowed from $2.59 to $2.48 in the past 30 days. Shares of SRRK have declined 70.1% year to date. Earnings of BNTX beat earnings estimates in two of the trailing four quarters and missed the same in the remaining two occasions, witnessing a surprise of 13.12%, on average.