Shares of Seagen have rallied 14.7% in the year so far against the industry’s decline of 18.9%. 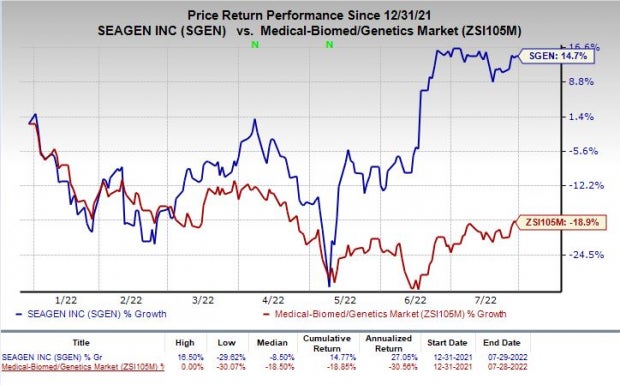 Adcetris generated net sales of $201.9 million in the United States and Canada, up 11% year over year. The drug, which is the majority contributor to SGEN’s revenues, is being evaluated in several label-expansion studies. Successful development and potential approval should boost its sales in the future.

Padcev sales in the second quarter totaled $123.6 million, up 23.3% sequentially. The sale of the drug rose 50% on a year-over-year basis.

The newly launched Tivdak generated sales worth $17.2 million in the second quarter of 2022, reflecting a sequential increase of 50.8%.

Royalty revenues of $39.1 million rose from the year-ago quarter’s $36.2 million. Seagen records royalty revenues on the sales of Adcetris from Takeda Pharmaceutical in ex-U.S. markets as well as from its collaboration with GlaxoSmithKline for Blenrep, and to a lesser extent, from Polivy’s sales under its collaboration with Roche (RHHBY - Free Report) .

Polivy is an antibody-drug conjugate (“ADC”) that uses Seagen’s technology and is commercialized by Roche.

In March 2022, Roche announced that the European Medicines Agency’s Committee for Medicinal Products for Human Use had recommended approval of Polivy in combination with chemotherapy for addressing previously untreated diffuse large B-cell lymphoma.

Selling, general and administrative (SG&A) expenses increased 33.4% year over year to $220.3 million, mainly on account of higher costs related to the recent launch of Tukysa in Europe as well as the commercial launch of Tivdak in the United States.

Seagen raised the financial guidance for 2022. Total revenues are now expected in the range of $1.71-$1.79 billion compared with the earlier projection of $1.66-$1.74 billion. The Zacks Consensus Estimate for the metric stands at -$1.81 billion.

Merck has been engaged in advanced talks with Seagen for potentially buying out the latter, per a Wall Street Journal (“WSJ”) article.

Both Seagen and Merck are yet to confirm the validity of the news through a formal statement. There is no guarantee that Merck would make a potential buyout offer.