Southwest Airlines ((LUV - Free Report) ) reported better-than-expected earnings per share and revenues for second-quarter 2022. Results were aided by upbeat passenger revenues owing to buoyant air-travel demand. Meanwhile, Hawaiian Holdings (HA - Free Report) reported a loss for second-quarter2022. However, the loss per share narrowed on a year-over-year basis. With the earnings season in full swing, June-quarter 2022 results of many airline companies were reported in detail in the previous week’s write up.

1. Southwest Airlines’ second-quarter 2022 earnings of $1.30 outpaced the Zacks Consensus Estimate of $1.17. Moreover, the bottom line improved more than 100% year over year. Operating revenues of $6,728 million outperformed the Zacks Consensus Estimate of $6,719.1 million and jumped 67.9% year over year. For third-quarter 2022, operating revenues are expected to register 8-12% growth from the third-quarter 2019 actuals. Economic fuel costs per gallon are expected to be $3.25-$3.35.LUV currently carries a Zacks Rank #3 (Hold).

Operating revenue per available seat mile (RASM: a key measure of unit revenues) in the quarter rose 33.8% year over year to 15.32 cents for total operations. Average fuel cost per gallon (economic) increased 109% to $3.95 in the second quarter. Gallons of jet fuel consumed increased 29.4% in the June quarter with more flights in operation.

3. Following the termination of the deal between Spirit Airlines and Frontier Airlines, JBLU agreed to buy SAVE for $3.8 billion. The deal on materialization will create the fifth largest airline in the United States. Per the terms of the deal, JBLU will pay $33.5 in cash for each share of SAVE. If the deal becomes effective after clearing regulatory hurdles, JBLU’s management confirmed that the carrier will buy more planes, boost the pilot-hiring process and renovate SAVE planes by adding to the legroom and boosting in-flight entertainment. The deal is expected to close by first-half 2024.

4.  SkyWest (SKYW - Free Report) reported second-quarter 2022 earnings of $1.07 per share, surpassing the Zacks Consensus Estimate of 48 cents. In the year-ago quarter, SKYW reported earnings of 1.22 per share. The 12.3% year-over-year decline in earnings was due to the 31% rise in total costs. Revenues of $799 million outperformed the Zacks Consensus Estimate of $699 million. The top line jumped 21.6% year over year, courtesy of a 3.3% increase in block hours (a measure of aircraft utilization) on completed flights. Addition of 43 planes to its fleet since second-quarter 2021 and COVID-related revenue concessions given to SkyWest’s major airline partners in the second quarter of 2021 led to year-over-year top-line growth.

Revenues from flying agreements (contributing 96.8% to the top line) rose 22.2% from the year-ago quarter’s figure. Expenses pertaining to salary, wages and benefits increased 23.6% in the quarter. With oil price rising, aircraft fuel expenses escalated 31.6% year over year. The airline carried 19.6% more passengers year over year. Passenger load factor (percentage of seats filled by passengers) increased 9.6 percentage points to 86% in the June quarter owing to the uptick in air-travel demand. SkyWest exited the second quarter with cash and marketable securities of $974.7 million compared with $860 million at the end of 2021.  Long-term debt (net of current maturities) was $2.86 billion compared with $2.71 billion at December 2021 end. Capital expenditures during the June quarter were $197 million. The spending was due to the purchase of eight E175s and other fixed assets by SKYW during the quarter. 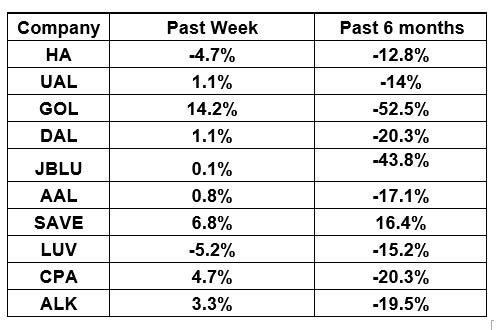 Second-quarter earnings reports from many other carriers are scheduled in the coming days.