Barring one-time items, earnings came in at $6.19 per share for the reported quarter, topping the Zacks Consensus Estimate of $6.06. Our estimate for the quarter was $7.18.

Net sales jumped around 113% year over year to $3,389 million in the quarter. The figure missed the Zacks Consensus Estimate by 6.3%. The figure compares to our estimate of $3,715.2 million.

Sales volumes were lower year over year in the reported quarter as operations at the company’s Ince manufacturing facility remain halted and unfavorable weather delayed the North American spring application season and reduced the number of acres planted.

Net sales in the Ammonia segment increased more than two-fold year over year to $1,115 million in the reported quarter. This compares to the consensus estimate of $1,196 million and our estimate of $1,052.3 million. Sales volume were similar to the prior year’s levels. Average selling prices in the quarter increased year over year on strong global demand and lower supply availability.

Sales in the Granular Urea segment jumped 92% year over year to $833 million. This compares to the consensus estimate of $843 million and our estimate of $927 million. Both average selling prices and sales volume increased in the quarter.

Sales in the AN segment rose around 86% year over year to $253 million. This compares to the consensus estimate of $266 million and our estimate of $302 million.  Sales volumes were down year over year while average selling prices increased on strong demand and reduced supply.

Net cash provided by operating activities was $889 million for the reported quarter, up nearly seven-fold year over year.

The company repurchased around 6.6 million shares for $590 million during the first half of 2022.

Demand for nitrogen remains favorable, supported by the need to replenish global grains stocks, per the company. It projects corn plantings in the United States to be lower than its expectation of 91-93 million acres at the beginning of 2022 due to poor weather during the spring that affected planting decisions. Nitrogen demand for industrial use in North America is expected to be supported by mining activity.

Shares of CF Industries have surged 102.8% in the past year compared with a 57.1% rise of the industry. 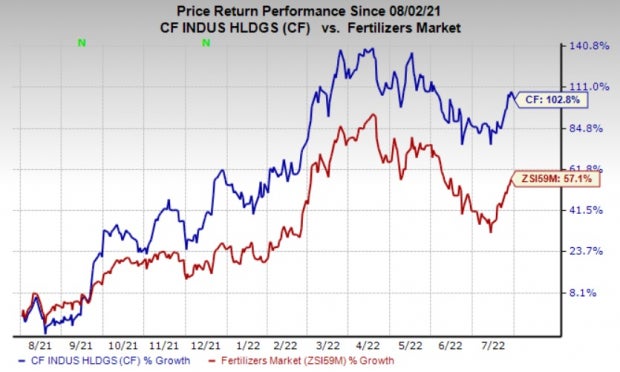 Cabot’s earnings beat the Zacks Consensus Estimate in each of the trailing four quarters, the average being 16.2%. CBT has gained around 37% over a year.

ATI, currently carrying a Zacks Rank #2, has a projected earnings growth rate of 1,069.2% for the current year. The Zacks Consensus Estimate for ATI's current-year earnings has been revised 12.5% upward in the past 60 days.

ATI’s earnings beat the Zacks Consensus Estimate in the last four quarters. It has a trailing four-quarter earnings surprise of roughly 128.9%, on average. ATI shares are up around 27% in a year.

Albemarle’s earnings beat the Zacks Consensus Estimate in each of the trailing four quarters, the average being 20%. ALB has gained roughly 16% in a year. The company flaunts a Zacks Rank #2.