Revenues in the reported quarter were $242.7 million, down 39% from the prior-year period’s level. The year-over-year downside in revenues can be attributed to a significant reduction in COVID-related contract development and manufacturing (CDMO) revenues. The upside was offset by a solid increase in product sales revenues. Revenues missed the Zacks Consensus Estimate of $291 million.

Shares of Emergent Biosolutions have declined 21.2% in the year so far compared with the industry’s 20.9% fall. 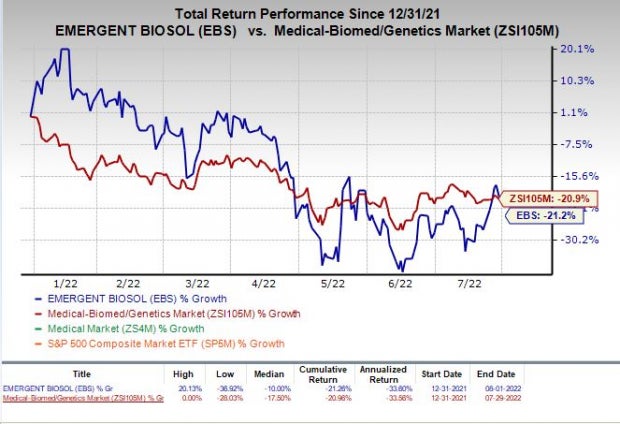 Total product sales increased 31% from the year-ago quarter’s level to $237.2 million, driven by strong sales of the anthrax vaccine and other products (VIGIV and BAT). The increase was slightly offset by a slightly lower than prior year sale of Narcan nasal spray.

Narcan (naloxone HCl) nasal spray added $101.6 million to product sales, down 4.3% year over year. The decline in sales can be attributed to erosion in sales following the launch of a generic in December 2021. The downside was slightly offset by higher volumes of Narcan sprays sold to public interest customers in the United States and Canada and from the sales of the aforementioned authorized generic product licensed to Sandoz, the generic arm of Novartis (NVS - Free Report) .

Emergent had authorized Novartis’ generic arm, Sandoz, to distribute a generic Narcan nasal spray, which was launched in the United States in December 2021.

Emergent reported zero revenues for its smallpox vaccine ACAM2000 in the second quarter. The company anticipates the majority of 2022’s ACAM revenues to be realized in the second half of the year.

Other product sales were $40 million, up 70% year over year.

Revenues from contracts and grants declined 71.3% year over year to $7.3 million. This substantial decline was due to lower revenues from the Biomedical Advanced Research and Development Authority (BARDA) due to the termination of a development and manufacturing agreement signed last November.

Total CDMO revenues were recorded at a loss of $1.8 million, compared to the year-ago quarter’s revenues of $190.9 million. While CDMO services revenues declined 97.4% year over year to $2.7 million, the CDMO lease revenues fell 105.2% to a loss of $4.5 million.

The decline in CDMO services revenues was due to lower combined revenues of $82 million from AstraZeneca (AZN - Free Report) and Janssen, a subsidiary of Johnson & Johnson (JNJ - Free Report) , which resulted in lower production-related work carried out at one of Emergent’s facilities, which reduced manufacturing activities. Moreover, Emergent reversed $8.3 million of previously recognized revenues under the Janssen contract.

In July 2020, J&J and Emergent entered into an agreement to provide contract development and manufacturing (CDMO) services for J&J’s single-shot, adenovirus-based COVID-19 vaccine for five years. Earlier in June 2022, both the companies announced their decision to terminate the deal, citing contract breaches.

We note that Emergent had received a setback last year when there was a manufacturing mishap at its Bayview facility where COVID-19 vaccine ingredients of J&J and AstraZeneca reportedly got mixed and led to several faulty batches of J&J’s vaccine. Emergent lost its contract for AstraZeneca’s vaccine following the mishap.

Revenues from the CDMO leases fell due to the completion of a public-private partnership between EBS and BARDA. The decline can also be contributed to a $21.9 million decrease in lease revenues related to the J&J’s contract and Emergent’s reversal of a previously recognized revenue of $5 million under the aforementioned contract.

Emergent reported an adjusted EBITDA loss of $29 million for the second quarter, down from the year-ago quarter’s earnings of $49.5 million.

In May, Emergent temporarily suspended its guidance for CDMO revenues and other metrics, including total revenues, adjusted net income, adjusted EBITDA and gross margin. Back then, Emergent maintained its previous guidance for all other business segments.

It has issued fresh guidance for total revenues, adjusted EBITDA and CDMO services while providing updated ranges for its other business segments.

Management continues to expect sales of $280-$300 million from anthrax vaccines. However, the company has raised the revenue guidance for Narcan nasal spray and smallpox vaccine. It now expects revenues from smallpox vaccine to be in the range of $225-$250 million compared with the previously guided range of $190-$210 million. Revenues from the Narcan nasal spray are expected to be between $300-$340 million, up from $240-$310 million expected previously. The projection for revenues from other products and contracts and grants was updated in the range of $235-$240 million, from its previously expected range of $200-$260 million.

Nutrien (NTR) to Post Q2 Earnings: What's in the Offing?