The company recorded net sales of $4,681.2 million, up around 37% year over year. The top line surpassed the Zacks Consensus Estimate of $4,583 million. Sales were driven by higher pricing and strong demand in many of the company’s end markets.

Reliance Steel also witnessed strength in semiconductors and energy (oil and natural gas) markets. Demand in the heavy industry was mixed in the quarter with construction equipment continued to improve at a healthy rate.

The company also witnessed steady demand for the toll processing services that it provides to the automotive market despite the impact of global microchip shortages on production levels. Additionally, demand in commercial aerospace recovered during the reported quarter.

Average prices per ton sold in the second quarter went up roughly 34% year over year to $3,240.

Reliance Steel ended the quarter with cash and cash equivalents of $504.5 million, a roughly 31% year-over-year decline. Long-term debt was $1,138 million, down around 31% year over year.

The company generated cash flow from operations of $270.2 million in the second quarter.

Reliance Steel repurchased around 1.1 million shares of its common stock for $193.9 million in the quarter.

Reliance Steel remains cautiously optimistic about the business environment in 2022 and sees robust underlying demand in the majority of its end markets. It expects shipment levels to be impacted by normal seasonal patterns including lower shipping volumes due to planned customer shutdowns and vacation schedules.

Reliance Steel’s shares have gained 18.4% in a year compared with the industry’s 9.9% rise. 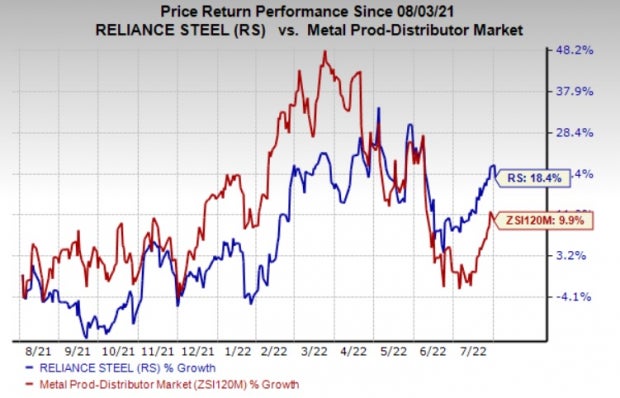 Cabot’s earnings beat the Zacks Consensus Estimate in each of the trailing four quarters, the average being 16.2%. CBT has gained around 32% over a year.

ATI, currently carrying a Zacks Rank #2 (Buy), has a projected earnings growth rate of 1,069.2% for the current year. The Zacks Consensus Estimate for ATI's current-year earnings has been revised 12.5% upward in the past 60 days.

ATI’s earnings beat the Zacks Consensus Estimate in the last four quarters. It has a trailing four-quarter earnings surprise of roughly 128.9%, on average. ATI shares are up around 26% in a year.

Albemarle’s earnings beat the Zacks Consensus Estimate in each of the trailing four quarters, the average being 20%. ALB has gained roughly 18% in a year. The company has a Zacks Rank #2.