Nikola will provide Romeo with interim funding of $35 million to continue its operations until the transaction closes. The fund will comprise $15 million in senior secured notes and up to $20 million for a pack delivery incentive. Additional liquidity support is accessible if the transaction closing is delayed. Nikola anticipates that the acquisition will save up to $350 million over the next four years. Moreover, a reduction of 30-40% in non-cell-related battery pack costs by the end of 2023 is also expected. The deal is also likely to enable Nikola to deliver increased range and charge rates in its commercial vehicles going forward.

Nikola is a comparatively young EV company. In March, it began serial production of its all-electric Tre truck in Arizona, followed by first deliveries in April. Although it reported a low output initially, Nikola has been successful in the end-to-end development and delivery of commercial EVs. Thus the deal will go a long way in solidifying its commitment to ensuring a zero-emission future.

Also, previously, it has been Romeo’s largest customer for batteries. So the acquisition can be an added advantage to the development of its commercial EVs as it will move one of the most costly components, i.e., battery packs, in-house. This will additionally provide NKLA the scope to strive for cost optimization and focus on its proprietary EV technology at the same time.

Romeo, which is based in California, specializes in building battery modules and packs for large electric commercial vehicles, using lithium-ion battery cells manufactured by other companies. Similar to Nikola and many other EV companies, Romeo went public via a SPAC merger in late 2020. The deal is therefore expected to be a vital contributor to Romeo’s future growth.

Harping on the existing relationship with Romeo, Nikola is confident about the partnership to create customer value.

Shares of NKLA have lost 34.4% over the past year against its industry’s 5% rise. 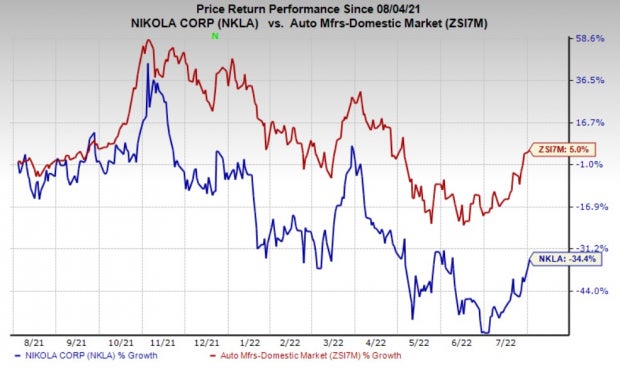 Harley-Davidson has an expected earnings growth rate of 6.9% for the current year. The Zacks Consensus Estimate for current-year earnings has been revised 6.9% upward in the past 30 days.

Harley-Davidson’s earnings beat the Zacks Consensus Estimate in three of the trailing four quarters and missed in one. HOG pulled off a trailing four-quarter earnings surprise of 49.52%, on average. The stock has declined 5.9% in the past year.

Genuine Parts has an expected earnings growth rate of 15% for the current year. The Zacks Consensus Estimate for current-year earnings has been revised 1.3% upward in the past 30 days.

Genuine Parts’ earnings beat the Zacks Consensus Estimate in all of the trailing four quarters. GPC pulled off a trailing four-quarter earnings surprise of 11.03%, on average. The stock has risen 20.7% over the past year.

PACCAR has an expected earnings growth rate of 45.3% for the current year. The Zacks Consensus Estimate for current-year earnings has been revised 7.4% in the past 30 days.

PACCAR’s earnings beat the Zacks Consensus Estimate in three of the trailing four quarters and missed in one. PCAR pulled off a trailing four-quarter earnings surprise of 7.44%, on average. The stock has risen 11.3% in the past year.