Clorox’s shares declined 6.1% in the after-market session on Aug 3, following the dismal quarterly results. Shares of the Zacks Rank #3 (Hold) company have lost 2.5% in the past three months compared with the industry’s 3.1% decline.

Adjusted earnings of 93 cents per share decreased 2% year over year and missed the Zacks Consensus Estimate of 95 cents. The earnings decline can be attributed to a higher effective tax rate, partly negated by reduced advertising costs. 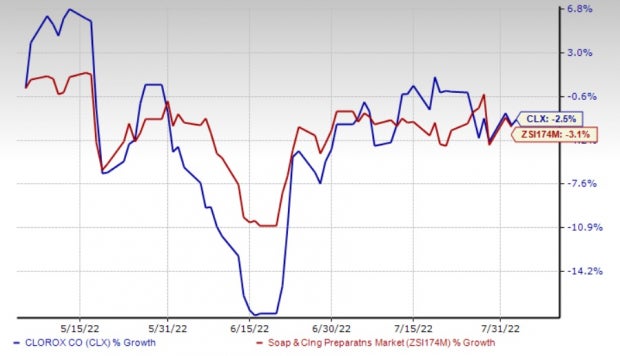 Net sales of $1,801 million were flat with the year-ago quarter and lagged the Zacks Consensus Estimate of $1,856 million. On an organic basis, sales improved 1%. Sales gains from strong pricing in the quarter were almost fully offset by lower shipments. However, the company reported sales growth in three of the four reportable segments.

The gross margin remained flat year over year at 37.1% in the fiscal fourth quarter. Elevated manufacturing and logistics costs, and higher commodity costs mostly offset the gains from pricing and cost savings initiatives.

Sales of the Health and Wellness segment declined 5% to $635 million, owing to soft sales across all three business units. The downside was led by an 18-point decline in volume, offset by a 13-point gain from a favorable price mix.

The Household segment’s sales improved 4% to $580 million, driven by sales growth in two of the three business units. Sales growth for the segment can be attributed to 8 points of pricing gains, offset by 4 points of lower volume.

Sales in the Lifestyle segment rose 1% year over year to $292 million, owing to growth in two out of three businesses. The segment benefited from a 4-point gain from a favorable price mix, offset by a 3-point decline in volume.

In the International segment, sales of $294 million were up 4% year over year, as a 13-point gain from favorable price mix was partly offset by 1 point of lower volume and an 8-point impact from unfavorable currency. Organic sales for the segment improved 12%.

Clorox ended fiscal 2022 with cash and cash equivalents of $183 million, and long-term debt of $2,474 million. In fiscal 2022, the company generated $786 million of net cash from operations.

The gross margin is expected to increase 200 bps in fiscal 2023, driven by the combined benefits of pricing actions, cost savings and supply-chain optimization efforts, offset by continued cost inflation. The company estimates selling and administrative expenses to be 15-16% of sales, including 1.5 points of impact from its strategic investments in digital capabilities and productivity enhancements.

The company anticipates advertising and sales promotion spending to be 10% of sales, driven by the company’s commitment to investing in its brand portfolio. The effective tax rate is anticipated at 24%.

The company expects adjusted earnings of $3.85-$4.22 per share for fiscal 2023. The guidance suggests a year-over-year decline of 6% to an increase of 3%. The company expects the normalization of demand for products that witnessed peaked trends in the past two years and continued progress to rebuild gross margin in fiscal 2023. The company’s earnings view excludes long-term investments in digital capabilities and productivity enhancements to provide greater visibility of the underlying operating performance.

Concurrent with the earnings release, management announced a streamlined operating model to create a faster, simpler company through the Reimagine Work under its IGNITE strategy. The operating model, which is expected to be implemented in the first quarter of fiscal 2023, will help increase efficiency, move decision-making closer to consumers, and enable it to better meet consumer needs.

The operating model is expected to generate ongoing annual savings of $75-$100 million, with benefits likely to occur starting in fiscal 2023. The company anticipates selling and administrative expenses to be 13% of sales over time due to these changes and its ongoing productivity efforts. It is also likely to record a charge of $75-$100 million related to the new operating model over fiscal 2023 and 2024. Of this, the company expected $35 million, or 20 cents, to be recognized in fiscal 2023 under other income and expenses.

Inter Parfums is engaged in the manufacturing, distribution and marketing of a wide range of fragrances and related products. It currently sports a Zacks Rank #1 (Strong Buy). IPAR’s shares have gained 7.8% in the past three months. You can see the complete list of today’s Zacks #1 Rank stocks here.

The Zacks Consensus Estimate for Inter Parfums’ current financial-year sales and EPS suggests growth of 14.9% and 18.6%, respectively, from the year-ago period’s reported figures. IPAR has a trailing four-quarter earnings surprise of 41.4%, on average.

Chewy, an online pet retailer, currently flaunts a Zacks Rank #1 and has an expected long-term earnings growth rate of 20%. CHWY’s shares have gained 45.4% in the past three months.

e.l.f. Beauty, a cosmetic company, currently has a Zacks Rank #2 (Buy). The company has a trailing four-quarter earnings surprise of 82.8%, on average. ELF’s shares have gained 45.3% in the past three months.

The Zacks Consensus Estimate for e.l.f. Beauty’s current financial-year sales suggests growth of 13% from the year-ago quarter’s reported figure, while the same for earnings per share indicates a decline of 2.4%. The consensus mark for ELF’s earnings per share has moved up by a penny in the past seven days.