Amarin Corporation Plc (AMRN - Free Report) reported an adjusted loss of 18 cents per American depositary share in second-quarter 2022, wider than the Zacks Consensus Estimate of 3 cents. The company recorded adjusted earnings of 2 cents per share in the year-ago quarter.

Revenues, primarily from its cardiovascular drug, Vazkepa, were down 39% year over year to approximately $94.4 million in the reported quarter. The Zacks Consensus Estimate for revenues was pegged at $88 million. Sales were hurt due to rising generic competition in the United States and lower net prices in certain countries.

The company continues to avoid revenue guidance for 2022 due to the uncertainty related to the COVID-19 pandemic and generic competition for its sole marketed drug, Vazkepa, in the United States, and challenges in achieving market access reimbursement for Vazkepa in Europe.

Shares of Amarin were down 4.51% on Aug 3 on lackluster second-quarter results. The stock has declined 62.3% so far this year compared with the industry’s 21.5% fall. 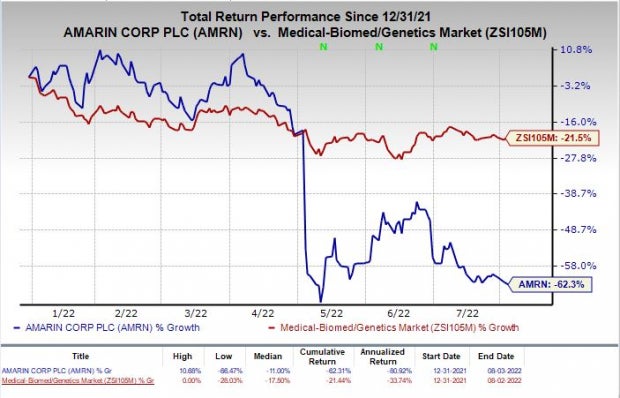 Product revenues, entirely from Vazkepa, were down 39% year over year, at $93.8 million.

U. S product revenues in the second quarter were $90.6 million, down 3% year over year due to lower volumes amid rising generic competition for Vazkepa’s reduction of triglyceride levels indication.

The company stated that a new generic version of Vazkepa entered the U.S. market during the first quarter, taking the total to three generic versions. Moreover, Vazkepa sales were also hurt due to ongoing challenges related to COVID-19 disruptions. The decline was slightly offset by the normalization of trade patterns and inventory destocking.

Licensing and royalty revenues were $0.6 million in the second quarter compared with $0.7 million in the year-ago period. The royalty revenues were primarily from sales of Vazkepa recorded by its partners in Canada, the China region and the Middle East. Initial drug sales in Germany were unfavorably impacted during the second quarter due to a significant surge in COVID-19 cases in the country.

In June, Amarin implemented a comprehensive cost and organizational restructuring plan to address the rising generic competition for Vazkepa in the United States. The plan is expected to help the company reduce its total operational expenditure over the next 12 months by approximately $100 million. It will enable Amarin to maintain a positive contribution margin in the U.S. while continuing to invest in its imminent European market launches and global expansion.

Amarin also announced initiatives to streamline operating expenditures, including reductions and reallocations in overall selling, general and administrative (SG&A) expenses and research and development (R&D) strategies, using a more focused, stepwise approach for its FDC program in its pipeline.

Amarin launched Vazkepa (U.S. tradename Vazkepa) in Germany in September 2021. The company is currently in the German market with temporary reimbursement. Amarin has initiated a fourth-round of price negotiations in Germany and anticipates the process to be completed by November this year.

The company continues to advance its reimbursement discussions across Europe with national health authorities in Norway, Finland, France, Italy, Israel, and the Netherlands. Amarin has received a positive reimbursement assessment from the French National Authority of Health (HAS), and is under the process of price negotiations.

The company also recently submitted market access dossiers in Portugal, Austria and Switzerland, which have been accepted and are currently in reimbursement negotiations. This brings the total number of submitted dossiers to 14 countries in Europe.

Amarin has made progress in Spain, the second major EU5 market, where the company is in price negotiations with Spain’s Ministry of Health. The company expects a possible pricing and reimbursement decision before 2022 ends.

BioNTech’s earnings estimates for 2022 have improved from $33.18 to $34.28 in the past 30 days. Shares of BioNTech have declined 30.2% year to date. Earnings of BNTX beat earnings estimates in all the last four quarters. BNTX delivered an earnings surprise of 56.87%, on average.

Pliant Therapeutics’ loss estimates for 2022 have narrowed from $3.36 to $3.20 in the past 30 days. Shares of Pliant Therapeutics have returned 28.1% year to date. Earnings of PLRX beat earnings estimates only once in the last four quarters. PLRX delivered an earnings surprise of 0.90%, on average

Scholar Rock’s loss estimates for 2022 have narrowed from $2.59 to $2.48 in the past 30 days. Shares of SRRK have declined 72.8% year to date. Earnings of BNTX beat earnings estimates in two of the trailing four quarters and missed the same in the remaining two occasions. SRRK delivered an earnings surprise of 13.12%, on average.