Revenues in the reported quarter increased 3.7% year over year to $1,077 million, surpassing the Zacks Consensus Estimate of $1,070 million. The company reported a backlog of $3.5 billion, which marked a 51% rise over last year's levels.

Selling, general and administrative expenses (SG&A) were $1094 million in the quarter under review, flat compared with the prior-year quarter. Terex reported an operating profit of $104 million, which marked a decline of 15% from $122.5 million in the last-year quarter.

The Aerial Work Platforms segment generated revenues of $481 million in the reported quarter, up 9% from the year-ago quarter. The segment reported an operating profit of $79.5 million compared with the prior-year quarter’s $72.1 million.

The Material Processing segment’s revenues totaled $598 million, reflecting year-over-year growth of 0.4%. The segment reported an operating income of $46.2 million, down 29% year over year. 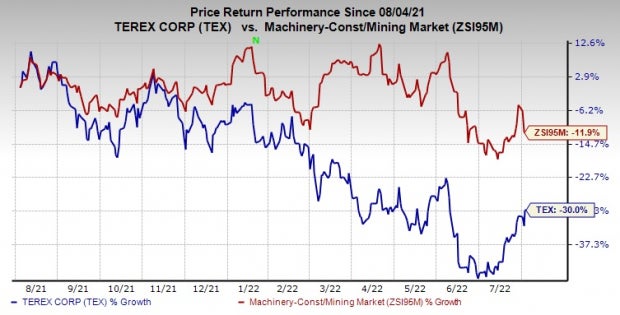 Terex's shares have slumped 30% over the past year, compared with the industry’s decline of 11.9%.

Greif has an estimated earnings growth rate of 37% for the current year. In the past 60 days, the Zacks Consensus Estimate for current-year earnings has been revised upward by 17%.

Greif pulled off a trailing four-quarter earnings surprise of 22.9%, on average. GEF’s shares have risen 15% in the past year.

Titan International has an estimated earnings growth rate of 165% for the current year. In the past 60 days, the Zacks Consensus Estimate for current-year earnings has been revised upward by 43%.

Titan International pulled off a trailing four-quarter earnings surprise of 56.4%, on average. TWI’s shares have soared 83% in a year.

MRC Global has an expected earnings growth rate of 259% for 2022. The Zacks Consensus Estimate for the current year’s earnings has moved up 24% in the past 60 days.

MRC Global has a trailing four-quarter earnings surprise of 140.8%, on average. MRC’s shares have surged 41% in the past year.