Monster Beverage’s earnings of 51 cents per share missed the Zacks Consensus Estimate of 68 cents and declined 32.2% year over year. The bottom line was impacted by inflationary operational costs for aluminum cans, shipping, freight and other inputs.

Shares of Monster Beverage fell nearly 5% following the second-quarter 2022 results. Shares of the Zacks Rank #3 (Hold) company have rallied 11.2% in the past three months compared with the industry’s 1.5% growth. 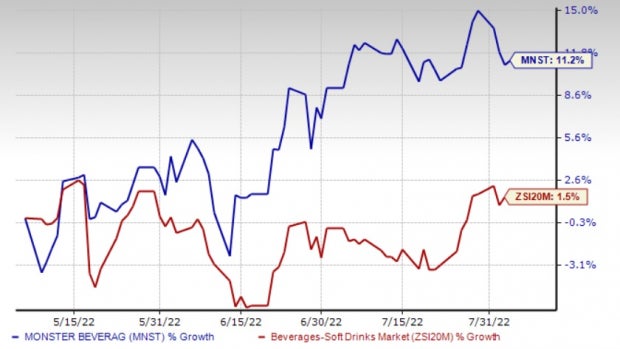 Alcohol Brands: Net sales for the segment, which includes various craft beers and hard seltzers purchased as part of the CANarchy transaction on Feb 17, 2022, were $32.4 million for the second quarter.

Other: Net sales for the segment, which includes some products of American Fruits & Flavors sold to independent third-parties (AFF Third-Party Products), declined 24.1% year over year to $6 million.

Operating income of $373 million declined 29.1% year over year, driven by a decrease in the gross margin, as well as higher operating expenses. The operating margin contracted 1,350 bps to 22.5% for the reported quarter.

In the reported quarter, the company bought back 3.3 million shares for an average price of $86.53 per share, resulting in a total value of $284.1 million. As of Aug 4, 2022, it had $657.4 million remaining under the previously authorized share repurchase plan.

Fomento Economico Mexicano, alias FEMSA, currently sports a Zacks Rank of 1 (Strong Buy). FMX has a trailing four-quarter earnings surprise of 18.9%, on average. It has a long-term earnings growth rate of 8.8%. The company has declined 11.3% in the past three months.

The Zacks Consensus Estimate for FEMSA’s current financial-year sales suggests growth of 11.3% from the prior-year reported number, whereas earnings estimates indicate a decline of 3.8%. The consensus mark for FMX’s earnings per share has been unchanged in the past 30 days.

PepsiCo currently carries a Zacks Rank #2 (Buy) and has an expected long-term earnings growth rate of 7.7%. PEP has a trailing four-quarter earnings surprise of 3.8%, on average. The company has gained 3.2% in the past three months.

The Zacks Consensus Estimate for PepsiCo’s current financial-year sales and earnings per share suggests growth of 5.4% and 6.2%, respectively, from the year-ago reported numbers. The consensus mark for PEP’s earnings per share has moved up by a penny in the past 30 days.

Brown-Forman currently has a Zacks Rank #2. BF.B has a trailing four-quarter earnings surprise of 8.1%, on average. The company has rallied 17.8% in the past three months.

The Zacks Consensus Estimate for Brown-Forman’s current financial year’s sales and earnings per share suggests growth of 7.2% and 14.4%, respectively, from the year-ago reported numbers. The consensus mark for BF.B’s earnings per share has been unchanged in the past 30 days.