Adjusted earnings (excluding 15 cents from non-recurring items) per share of $1.32 outpaced the consensus mark by 11.9% and improved 21.1% year over year.

Republic Services' average recycled-commodity price per ton sold in the first quarter was $218, down $17 on a sequential basis but up $48 year over year.

So far this year, shares of Republic Services have gained 19.6% against a 6.9% decline of the industry it belongs to. 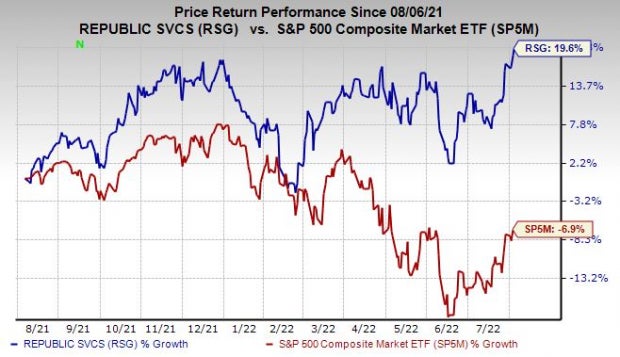 Quarterly revenues of $3.41 billion surpassed the consensus estimate by 2.5% and increased 21.4% year over year. RSG’s top line includes a favorable impact of 11.1% from internal growth and 10.3% from acquisitions/divestitures.

Total selling, general and administrative expenses were $391.5 million, up 24% from the year-ago quarter’s figure.

Republic Services exited second-quarter 2022 with cash and cash equivalents of $119.4 million compared with $39 million at the end of the prior quarter.

Long-term debt (net of current maturities) was $11.6 billion compared with $9.61 billion at the end of the prior quarter.

RSG generated $857.9 million of cash from operating activities in the reported quarter.  The Adjusted free cash flow was $621.1 million.

During the reported quarter, RSG did not do any share repurchase. As of Jun 30, 2022, the remaining authorized purchase capacity under October 2020 repurchase program was $1.5 billion.

RSG announced that its board approved a dividend hike of approximately 8% to 49.5 cents per share. The new dividend will be paid out on Oct 14 to its shareholders of record as of Oct 3.

Recent Performances of Some Other Business Services Companies