Tesla Inc. (TSLA - Free Report) recently announced that the decision of its three-for-one split shares has been ratified by shareholders at the company’s annual meeting held on Aug 4. The stock split will be in the form of a stock dividend to ease out the ownership of employees and investors. Each stockholder of record on Aug 17 is entitled to a dividend of two additional shares of common stock for each then-held share to be distributed after the close of trading on Aug 24. Tesla’s stock will begin trading on Aug 25 on the new split-adjusted basis.

The recent announcement comes two years after a five-for-one split was announced in August 2020. During that time, the company’s stock was trading at nearly $1,300 a share, and the stock-split announcement sent the stock price bolting to a record high of $2,000 a share. After the split, the price per share was reset to around $460 and with a valuation of about $430 billion. The split resulted in immense growth in the stock, and the company got the scope to almost double its valuation over the next year. The split took its market capitalization above $1 trillion.

On the day of the recent announcement, the stock traded at $864 per share at market close.

Stock splits do not affect a company’s fundamental business model. Instead, they make high-end stocks more affordable to ordinary and small-scale investors, thereby diversifying and expanding the investor pool. The coveted Tesla stock has been in the cards of many retail investors, and the latest decision will provide them the access and usher in a set of new investors for the world’s largest auto giant.

Although Tesla is undoubtedly the reigning player in the EV space today, certain risks weighed on the company in early 2022. Supply-chain disruptions remain with the same intensity, and the company’s production in China was significantly affected by the resurgence of Covid-19-related restrictions. It is still not fully certain if the stock-split can be relied upon to provide an impetus to the company’s falling stock price, which is down 18% this year.

Shares of Tesla have jumped 21.1% over the past year, outperforming its industry’s 0.8% rise. 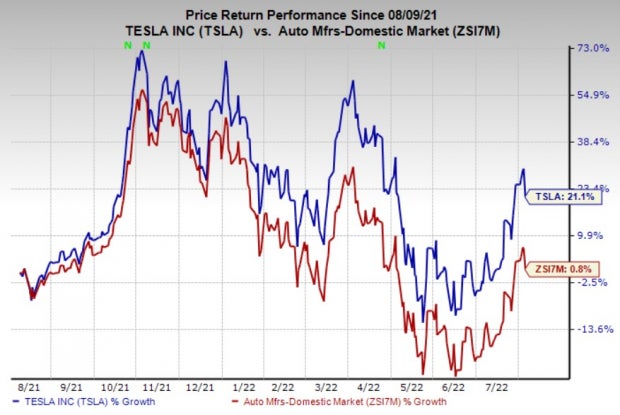 Harley-Davidson has an expected earnings growth rate of 6.9% for the current year. The Zacks Consensus Estimate for current-year earnings has been revised 7% upward in the past 30 days.

Harley-Davidson’s earnings beat the Zacks Consensus Estimate in three of the trailing four quarters and missed in one. HOG pulled off a trailing four-quarter earnings surprise of 49.52%, on average. The stock has declined 6.2% in the past year.

Genuine Parts has an expected earnings growth rate of 15% for the current year. The Zacks Consensus Estimate for current-year earnings has been revised 1.3% upward in the past 30 days.

Genuine Parts’ earnings beat the Zacks Consensus Estimate in all of the trailing four quarters. GPC pulled off a trailing four-quarter earnings surprise of 11.03%, on average. The stock has risen 21.7% over the past year.

PACCAR has an expected earnings growth rate of 45.3% for the current year. The Zacks Consensus Estimate for current-year earnings has been revised 7.4% upward in the past 30 days.

PACCAR’s earnings beat the Zacks Consensus Estimate in three of the trailing four quarters and missed in one. PCAR pulled off a trailing four-quarter earnings surprise of 7.44%, on average. The stock has risen 14.1% in the past year.