Denali Therapeutics (DNLI - Free Report) incurred a loss of 48 cents per share in second-quarter 2022, narrower than the Zacks Consensus Estimate of a loss of 52 cents and the year-ago quarter’s loss of 50 cents per share.

Collaboration revenues came in at $52.5 million in the reported quarter, beating the Zacks Consensus Estimate of $45 million and up from $22.9 million in the year-ago period. The increase was primarily due to a $12.0 million preclinical milestone earned for approval of the CTA for TAK-920/DNL919 (ATV:TREM2) in the second quarter and $40.0 million of milestone revenues earned in April 2022 upon dosing the first patient in a phase II  study of SAR443820/DNL788 in individuals with amyotrophic lateral sclerosis (ALS). 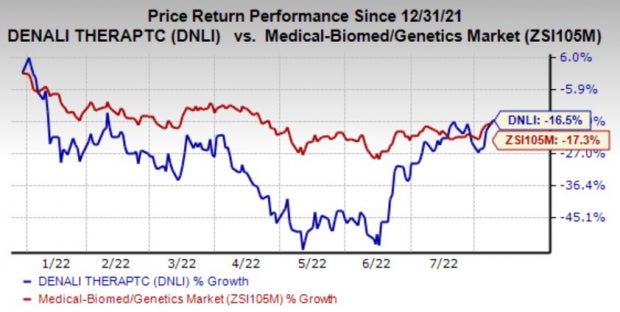 General and administrative expenses were $21.2 million, up from $19 million in the year-ago quarter.

Cash, cash equivalents and marketable securities were approximately $1.16 billion as of Jun 30, 2022.

Denali has collaborated with Biogen (BIIB - Free Report) to advance its LRRK2 inhibitor program to address Parkinson’s disease (PD). In May 2022, Denali and Biogen announced that dosing had commenced in the global phase IIb LUMA study to evaluate the efficacy and safety of BIIB122 compared to placebo in 640 participants with early-stage PD.

The phase III LIGHTHOUSE study in approximately 400 participants with PD with a confirmed LRRK2 pathogenic variant is expected to begin in the second half of the year.

Denali has initiated recruitment of phase II/III COMPASS study, which will enroll approximately 54 MPS II (Hunter syndrome) patients. Upon completion of the ongoing phase I/II study, and together with data from the global COMPASS study, this combined data package will potentially support registration,