Ralph Lauren has reported adjusted earnings per share of $1.88 in the fiscal first quarter, surpassing the Zacks Consensus Estimate of $1.72. However, the bottom line declined 18% from the prior-year quarter’s $2.29.

Net revenues grew 8% year over year to $1,490.6 million and beat the Zacks Consensus Estimate of $1,413 million. On a constant-currency (cc) basis, revenues were up 13% from the prior-year quarter. The metric gained from solid growth across all regions. This was partly offset by the impacts of 510 basis points (bps) from adverse currency rates.

The company’s global digital ecosystem witnessed year-over-year low-double-digit revenue growth and revenue growth of more than 80% on a two-year basis. This was driven by strength across owned and wholesale digital channels globally. The company also introduced additional digital sites in key markets, including India and Israel, in the fiscal first quarter.

The Zacks Rank #3 (Hold) stock has gained 6.4% in the past three months compared with the industry’s growth of 2.5%. 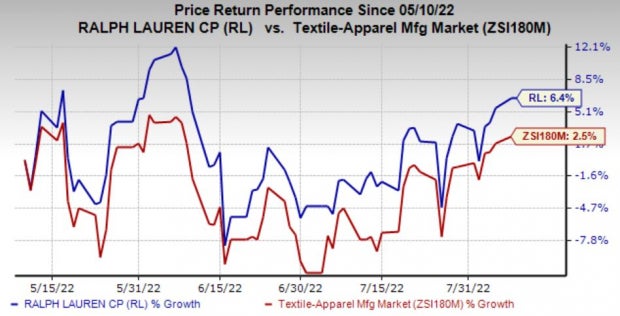 North America: In the fiscal first quarter, the segment’s revenues advanced 6% from the year-ago quarter to $701 million but came below the consensus mark of $727.2 million. Comparable store sales (comps) for North America’s retail channel improved 5%, including a 5% increase in brick-and-mortar stores and 2% growth in digital commerce. Revenues from the North America wholesale business grew 5% year over year.

Europe: The segment’s revenues grew 17% year over year to $416 million, with a 28% improvement in currency-neutral revenues. The metric also came ahead of the consensus mark of $361.6 million. Comps for the retail channel in Europe were up 34%, owing to a 45% increase in brick-and-mortar stores and a 7% rise in digital sales. Revenues for the segment’s wholesale business rose 8% on a reported basis and 20% at cc.

Asia: The segment’s revenues increased 16% year over year to $334 million on a reported and 26% on a currency-neutral basis. The metric also came ahead of the consensus mark of $296.5 million. Comps in Asia were up 19%, backed by 17% growth in brick-and-mortar stores and a 37% increase in the digital business.

Ralph Lauren's adjusted gross profit margin contracted 180 bps year over year on a reported basis and 80 bps on a cc basis to 68%. However, the metric expanded 350 bps on a three-year basis on solid AUR growth. Improved pricing and promotions were more than offset by higher freight and global supply-chain delays.

Ralph Lauren ended the quarter with cash and short-term investments of $1,776.9 million, total debt of $1.1 billion, and total shareholders’ equity of $2,364.1 million. Inventory grew 47% year over year to $1,178.2 million. The company repurchased Class A shares for about $213 million in the fiscal first quarter.

Management has issued the second quarter and retained its fiscal 2023 guidance based on the supply-chain condition, inflationary pressures, foreign currency movement, the war in Ukraine, and COVID-19 variants and other COVID-related disruptions.

The operating margin is still forecasted to be 14-14.5% at cc, which includes a negative impact of unfavorable currency of 180 bps. Notably, it reported an operating margin of 13.1% on a 52-week comparable basis and 13.4% on a 53-week basis in the last year.

The gross margin is still envisioned to expand 30-50 bps at cc on a 52-week comparable basis, driven by solid AUR growth and positive product mix, which is expected to more than offset higher freight and product cost inflation. However, the unfavorable currency is likely to hurt the metric by 150 bps.

For the second quarter of fiscal 2023, the company expects year-over-year revenue growth of 11% at cc. This includes a 750-bps impact of unfavorable currency.

The company anticipates an operating margin of 15.4-15.7% at cc, which includes the negative impacts of higher freight and marketing expenses, which are likely to reduce in the second half of fiscal 2023. The metric is expected to be hurt by 240 bps of unfavorable currency. The gross margin is predicted to contract 40-80 bps year over year at cc due to rising freight and product costs, offsetting continued AUR growth. Unfavorable currency impacts of 190 bps are likely to dent the gross margin.

Oxford Industries is an apparel company that designs, sources, markets and distributes products bearing the trademarks of its owned and licensed brands. It currently has a Zacks Rank #2 (Buy). OXM has a trailing four-quarter earnings surprise of 99.7%, on average.

Snap-on, a global provider of professional tools, equipment and related solutions for technicians, vehicle service centers, original equipment manufacturers and other industrial users, currently has a Zacks Rank #2. SNA has a trailing four-quarter earnings surprise of 8.9%, on average.

Vail Resorts, an operator of mountain resorts and urban ski areas in the United States, presently has a Zacks Rank #2. MTN has a trailing four-quarter earnings surprise of 1.4%, on average.