Global Blood (GBT) to be Acquired by Pfizer, Misses on Earnings

Global Blood Therapeutics, Inc. announced that it has entered into a definitive agreement with pharma giant Pfizer Inc. (PFE - Free Report) , wherein the latter will acquire GBT for approximately $5.4 billion.

Owing to the proposed acquisition, GBT decided not to hold its scheduled call to discuss second quarter 2022 results.

Per the agreement, Pfizer will acquire all of Global Blood’s outstanding shares for $68.50 per share in cash, for a total value of approximately $5.4 billion, including debt and net of cash acquired. The transaction is subject to customary closing conditions.

GBT’s sole marketed drug, Oxbryta (voxelotor), is approved in the United States for the treatment of sickle cell disease (“SCD”), a chronic, inherited blood disorder that affects hemoglobin levels. The drug is approved by the FDA as an oral, once-daily treatment for SCD in patients aged 12 years or above.

Oxbryta is also approved in the European Union and several other countries.

In December 2021, the FDA granted accelerated approval to the supplemental new drug application seeking approval for Oxbryta to treat SCD in children aged four to less than 12 years.

Back then, the regulatory body also approved a new drug application for Oxbryta tablets for oral suspension — a new dispersible, once-daily tablet dosage for patients aged four to less than 12 years and for older patients who have difficulty swallowing whole tablets.

The above acquisition is likely to boost Pfizer’s strong portfolio of drug candidates for various diseases and enhance the company’s presence in rare hematology. The boards of Directors of both GBT and PFE have approved the transaction.

Shares of Global Blood have surged 127.6% in the year so far against the industry’s decline of 18%. 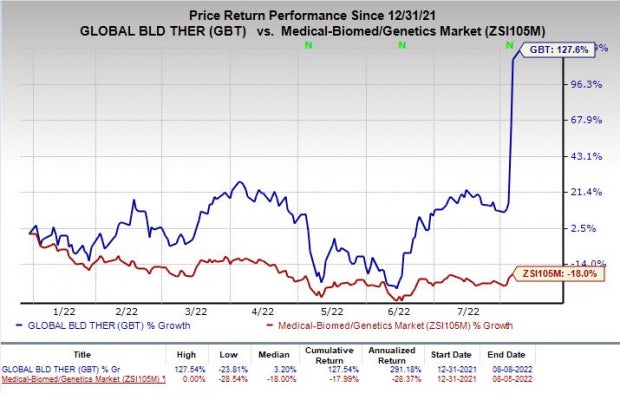 Research and development expenses in the reported quarter were $64.8 million, up from $51.7 million in the year-ago quarter.

Earnings of Bio-Techne have surpassed estimates in three of the trailing four quarters and missed on the remaining occasion. TECH delivered an earnings surprise of 3.30%, on average.