Adjusted earnings (adjusted for stock-based compensation, depreciation and tax provision) came in at 28 cents per share in the reported quarter compared with 16 cents a year ago.

Catalyst shares were up 7.83% on Aug 9, after market hours, after the announcement of encouraging second-quarter results. Shares of Catalyst have surged 56.6% year to date against the industry’s fall of 17.7%. 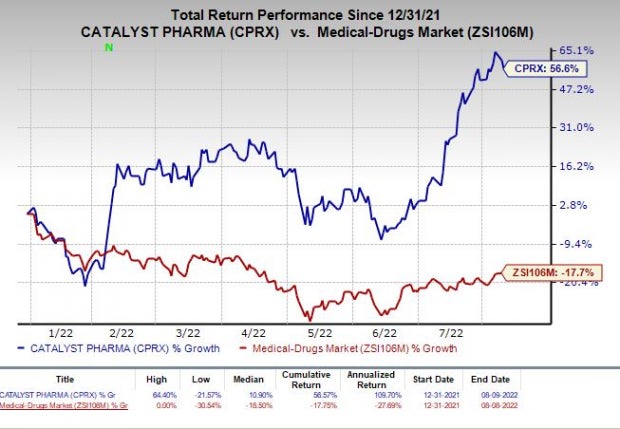 Firdapse generated sales worth $53 million in the second quarter, up 57.7% year over year, primarily driven by organic sales growth of Firdapse and the transition of Ruzurgi patients to Firdapse treatment after the dispute settlement with Jacobus Pharmaceuticals.

Research and development (R&D) expenses of $4 million, down from $4.5 million reported in the year-ago quarter.

Selling, general and administrative (SG&A) expenses totaled $12.9 million, up from $11.5 million reported in the year-ago quarter.

Catalyst reiterated the guidance it had provided earlier this year.

The guidance assumes continued recovery in macro-economic and healthcare activity throughout 2022 from the COVID pandemic.

Catalyst reached a settlement with Jacobus on its ongoing patent infringement litigation in July. The settlement marks the end of an ongoing dispute between Catalyst and Jacobus Pharmaceuticals since the latter’s drug Ruzurgi (amifampridine) was approved by the FDA in 2019 for treating LEMS in pediatric patients. This was contested by CPRX in a lawsuit, claiming that the regulatory body’s approval violated the orphan drug designation granted to Firdapse for treating LEMS. Pursuant to the settlement terms, Catalyst will stop pursuing all claims related to the litigation.

Catalyst also acquired certain intellectual property rights of Jacobus, including the rights to develop and commercialize Ruzurgi in the U.S. and Mexico. In return, Jacobus will be eligible to receive single-digit royalties on net sales of amifampridine in the United States. Catayst will also make a cash payment to Jacobus as part of the deal.

Aerie’s loss estimates for 2022 have widened from $2.01 to $2.07 in the past 30 days. Shares of Aerie have returned 60% year to date. Earnings of AERI beat estimates in one of the last four quarters and missed the mark on the other three occasions. AERI delivered an earnings surprise of 70.27%, on average.

Jazz’s earnings estimate for 2022 have increased from $17.04 to $17.35 over the past 30 days. Shares of JAZZ have returned 22.9% year to date. Earnings of Jazz beat estimates in three of the last four quarters, while missing the same in one. JAZZ reported a positive earnings surprise of 10.94%, on average.

Verrica’s loss estimates for 2022 have remained steady at $1.13 over the past 30 days. Shares of VRCA have declined 64.5% year to date. Earnings of Verrica beat estimates in all of the last four quarters. VRCA reported a positive earnings surprise of 28.45%, on average.