After its launch, the 2022 F-150 pickup received a resounding response as the first all-electric version in the F-series. The company had announced that it will ramp up production significantly to cater to the demand surge. In 2021-end, pre-orders for the vehicle neared the 200,000 mark, and soon after, it stopped accepting reservations so that the capping would allow it to focus on converting the existing ones to orders. Even though capacity was intensified, in May 2022, Ford closed further orders for the 2022 model of the pickup truck as it was unable to keep up with the pace of demand, especially under supply chain snarls.

It is indeed good news for customers eager to possess the F-150 Lightning, but the upgraded prices might be a pinch for them. Prices of the EV truck have been increased between $6,000 and $8,500 across the various trim levels due to a surge in material costs and other factors, as cited by the company.

However, the price increases will not affect customers who have already ordered a vehicle and are awaiting delivery. The sticker shock will be felt by reservation holders who have not yet ordered a truck.

Although there has been an uptick in prices, the new F-150 Lightning vehicles come with new features and upgrades. The new models have an EPA estimated range of 240 miles, marking an increase of 10 miles from the previous version. Two new colors have been introduced that replace some prior colors. The Pro Trailer Hitch Assist feature, an industry first, will ensure automatic steering, throttle and brake inputs to make hitching trailers easier.

Ford’s F-series has been the best-selling truck in the United States for nearly five decades. The F-150 Lightning is carrying forward the success and pivoting the company for a notable transition into the electric space. It is, therefore, not certain if the price increases will make customers hesitant to purchase. The company is focused on making a mark in the EV domain. Recently it announced initiatives for sourcing battery capacity and raw materials to reach its targeted annual run rate of 600,000 EVs by late 2023 and more than 2 million EVs by the end of 2026.

Driven by the constrained supply situation brought about by soaring prices, an intense chip crisis and parts shortage, more and more automakers are being forced to hike prices. EV giant Tesla Inc. (TSLA - Free Report) has hiked prices several times this year, including a significant hike twice in the same week of March when it charged $1,000 extra for all vehicles equipped with long-range battery packs. In June, Tesla again increased prices for all its car models in the United States, with some models going up by as much as $6,000.

In June, General Motors (GM - Free Report) announced a price hike for all new reservations for its already expensive GMC Hummer EV pickup or SUV. Prices will see an increase of $6,250 to the base manufacturer's suggested retail price. General Motors cited higher prices of parts technology and strained logistics as the driving factors.

Shares of Ford have jumped 11.2% over the past year compared with its industry’s 3% rise. 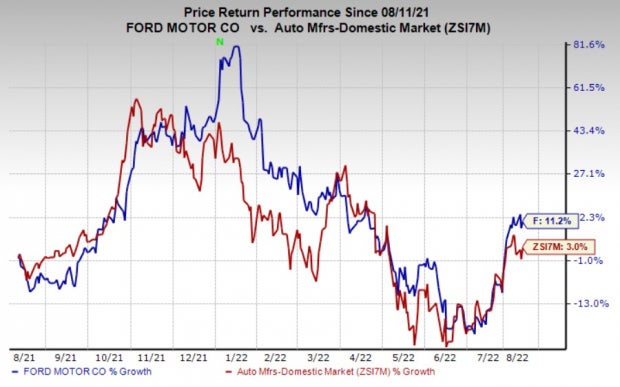 Harley-Davidson has an expected earnings growth rate of 6.9% for the current year. The Zacks Consensus Estimate for current-year earnings has been revised 7% upward in the past 30 days.

Harley-Davidson’s earnings beat the Zacks Consensus Estimate in three of the trailing four quarters and missed in one. HOG pulled off a trailing four-quarter earnings surprise of 49.52%, on average. The stock has declined 7.2% in the past year.