PulteGroup, Inc. (PHM) Is a Trending Stock: Facts to Know Before Betting on It

PulteGroup (PHM - Free Report) has recently been on Zacks.com's list of the most searched stocks. Therefore, you might want to consider some of the key factors that could influence the stock's performance in the near future.

Shares of this homebuilder have returned +1.1% over the past month versus the Zacks S&P 500 composite's +9.3% change. The Zacks Building Products - Home Builders industry, to which PulteGroup belongs, has gained 6.6% over this period. Now the key question is: Where could the stock be headed in the near term?

PulteGroup is expected to post earnings of $2.78 per share for the current quarter, representing a year-over-year change of +52.8%. Over the last 30 days, the Zacks Consensus Estimate has changed -0.7%.

The consensus earnings estimate of $11.18 for the current fiscal year indicates a year-over-year change of +53.2%. This estimate has changed +4.5% over the last 30 days.

For the next fiscal year, the consensus earnings estimate of $9.84 indicates a change of -12% from what PulteGroup is expected to report a year ago. Over the past month, the estimate has changed -4.1%. 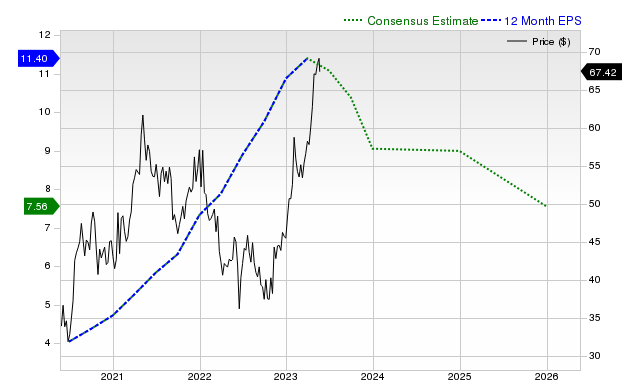 In the case of PulteGroup, the consensus sales estimate of $4.15 billion for the current quarter points to a year-over-year change of +19.3%. The $16.8 billion and $16.94 billion estimates for the current and next fiscal years indicate changes of +20.7% and +0.8%, respectively.

PulteGroup reported revenues of $3.93 billion in the last reported quarter, representing a year-over-year change of +16.9%. EPS of $2.73 for the same period compares with $1.72 a year ago.

Compared to the Zacks Consensus Estimate of $4.03 billion, the reported revenues represent a surprise of -2.52%. The EPS surprise was +5.81%.

Pfizer Inc. (PFE) Is a Trending Stock: Facts to Know Before Betting on It