Valued at $524.1 million, the contract is expected to get completed by June 2025. Per the terms of the agreement, Lockheed will procure long-lead time materials, parts, components, and efforts for the production of 14 F-35A aircraft and four 15 F-35B aircraft.

The contract will cater to the government of Italy. The majority of the work related to this deal will be carried out in Fort Worth, TX.

The recent tiff between Russia and Ukraine led to nations increasing their defense spending on military equipment and arsenals to strengthen their defense systems. Military aircraft with multi-mission capabilities are an integral part of any efficient defense system.

It is imperative to mention that Lockheed Martin enjoys a dominant position in the global military aircraft space with its F-35 fleet. The stealth aircraft boasts features that make it an ideal choice for many nations. Moreover, LMT’s constant efforts to modernize and upgrade the aircraft with advanced technologies and enhance its capabilities to meet the current warfare needs boost demand significantly.

The F-35 program remained the largest revenue generator for its Aeronautics business unit and accounted for 68% of Aeronautics’ net sales in 2021.
Lockheed Martin has delivered 814 F-35 airplanes since the program's inception, with 169 jets in backlog till June 2022. This, along with the latest contract win, surely boosts the sales expectation for the Aeronautics business segment.

The stealth aircraft is expected to witness a continued upswing in its demand as the U.S. government’s current inventory objective is pegged at 2,456 aircraft for the U.S. Air Force. This, in turn, should bolster LMT’s revenues from the military aircraft arena.

Northrop Grumman has a long-term earnings growth rate of 2.2%. The Zacks Consensus Estimate for NOC’s 2022 sales indicates an improvement of 2% from 2021’s reported figure.

Textron boasts a long-term earnings growth rate of 12.5%. The Zacks Consensus Estimate for TXT’s 2022 sales indicates year-over-year growth of 6.5% from the prior year reported figure.

In the past year, shares of Lockheed Martin have gained 19.8% against the industry’s fall of 33.3%. 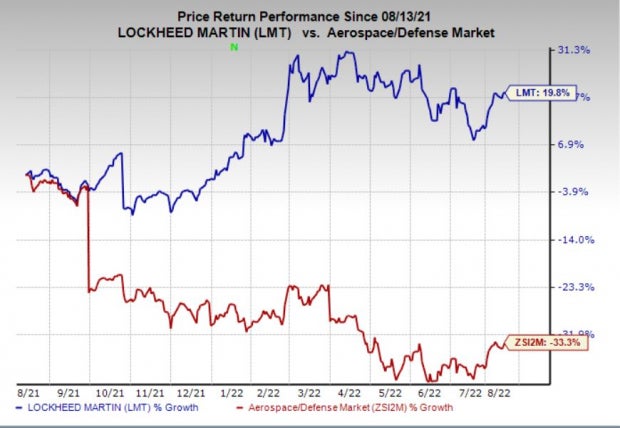