Pilgrim's Pride Corporation (PPC - Free Report) is benefiting from focus on strategic growth initiatives, including a customer-centric approach and capacity expansions. Improvement in the foodservice business is also yielding. The leading poultry producer benefited from sales growth in its Mexico, Europe and U.S. operations in the second quarter of 2022.

The Zacks Rank #2 (Buy) company’s shares have increased 6.7% in the past six months against the industry’s 10.7% decline. The company has comfortably outperformed the Zacks Consumer Staples sector, which witnessed a 2.2% decline during the same period. 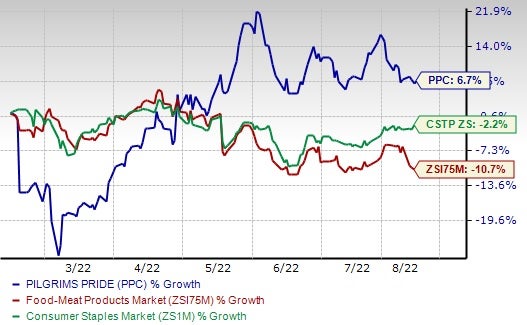 Pilgrim's Pride reported impressive second-quarter 2022 results, with the top and the bottom line increasing year over year. Earnings in the quarter surpassed the Zacks Consensus Estimate. The company reported adjusted earnings of $1.54 a share, up from 63 cents in the year-ago quarter. It generated net sales of $4,631.6 million, which increased by 27.3%. The company registered top-line growth across all business units, fueled by impressive service levels to Key Customers, which led to a solid sequential profit rise. Quarterly results benefited from strength in diversified U.S. portfolio. Pilgrim's Pride demand in overall retail and foodservice operations remained impressive. Pilgrim's Pride continues to benefit from long-term investments like automation and focus on service for key customers. The company’s gross and operating margins were higher, driven by increased commodity market pricing, solid consumer demand, enhanced operational efficiencies and growth with key customers.

Pilgrim’s Pride’s customer-centric approach has propelled it to introduce unique offerings that provide competitive advantages. The company’s focus on key customers is a pathway for refining its portfolio and creating competitive advantages over its peers. Taking into account Pilgrim's Pride’s focus on profitable growth and impressive market momentum, management recently unveiled some new investments in the United States. In this regard, management is investing in expanding the Athens, Georgia, facility to improve service levels and boost Key Customer growth. The company will undertake operational excellence improvements via automation throughout its U.S. footprint and construct a protein conversion plant for pet food ingredients in Georgia. Pilgrim's Pride will develop a Prepared Foods facility in the Southeast USA to support branded growth and further diversify its portfolio. The company incurred capital expenditures of $115 million in the second quarter of 2022, taking the total year-to-date number to $196 million. The company estimates its investments to be approximately $450 million in the next three years.

Apart from this, the company has been steadily augmenting marketing support of its brands as they expand and enter new regions. Additionally, it resorts to frequent supply chain improvements to enhance efficiency and reduce costs. In this respect, it has been progressing well with developing automation technology for its processing plants. The introduction of such advanced technology is expected to increase efficiency and aid in combating labor availability issues. Keeping along its growth strategy, Pilgrim’s Pride acquired Kerry Consumer Foods’ Meats and Meals business in the U.K. and Ireland in September 2021. The acquired business solidifies Pilgrim’s Pride’s footing by operating as a business division under the company’s European operations.

Chef’s Warehouse, a distributor of specialty food products in the United States, currently flaunts a Zacks Rank #1 (Strong Buy). CHEF has a trailing four-quarter earnings surprise of 355.9%, on average. You can see the complete list of today’s Zacks #1 Rank stocks here.

General Mills, which manufactures and markets branded consumer foods worldwide, currently carries a Zacks Rank of 2. GIS has a trailing four-quarter earnings surprise of 6.5%, on average.