Results have been hurt by the rapidly changing consumer behavior, along with reduced foot traffic in home center channels that led to high inventory. Also, unfavorable weather conditions in the Home & Garden business dented the demand and retailer replenishment.

In response to this, the company undertook actions to reduce 17% of the salaried workforce in the fiscal third quarter, which is likely to generate savings of more than $30 million on an annual basis. Also, it remains on track to complete the sale of its Hardware & Home Improvement business to ASSA ABLOY. SPB is also progressing well with the integration of Tristar into its Home and Personal Care Appliances business, and renamed it Empower Brands. 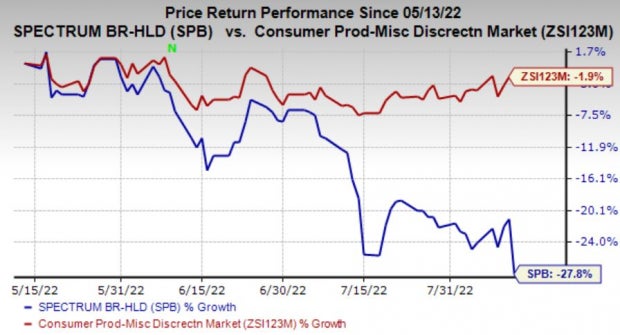 The company reported adjusted earnings of 54 cents per share, down 25% from 72 cents in the year-ago period. Also, the figure missed the Zacks Consensus Estimate of $1.50. The year-over-year decline can be attributed to lower adjusted EBITDA.

Spectrum Brands' net sales grew 10% year over year to $818 million but lagged the Zacks Consensus Estimate of $918 million. Acquisition-related gains of $71.3 million aided the top line, while adverse foreign currency impacts of $29.5 million remained a drag. Excluding the currency headwinds and sales gains from buyouts, organic net sales rose 4.4%. The increase can mainly be attributed to the pricing actions in response to cost inflation and enhanced fulfillment.

The company’s operating income rose 29.4% to $38.7 million, driven by the gain on contingent consideration liability related to the Tristar buyout, which was somewhat offset by the gross margin decline, higher distribution costs, and increased investment in restructuring, optimization and strategic transaction initiatives. Operating margin expanded 70 bps year over year to 4.7%.

Adjusted EBITDA plunged 19.4% to $80.1 million in the fiscal third quarter. The adjusted EBITDA margin contracted 360 bps to 9.8% due to reduced volume and higher supply-chain costs.

Sales in the Home & Personal Care segment increased 20% to $329.3 million. This was mainly due to a $65.8-million contribution from the recently acquired Tristar business. Excluding the gains from the acquisition and the $17.8-million impact from adverse currency rates, organic net sales for the segment grew 2.5% due to favorable pricing impact. Also, continued momentum led to double-digit growth in garment care and growth in personal care appliances categories, which more than offset declines in small kitchen appliances categories.

The segment's adjusted EBITDA of $3.6 million plunged 69.5% due to adverse currency, and elevated distribution and inventory management costs stemming from supply-chain issues.

The segment's adjusted EBITDA slumped 17% to $40.9, while the adjusted EBITDA margin declined 500 bps year over year to 14.1% due to unfavorable currency and product mix.

Spectrum Brands has revised its guidance for fiscal 2022. The company expects mid-single-digit sales growth, with mid-twenties EBITDA decline. For fourth-quarter fiscal 2022, EBITDA is expected to remain relatively flat on a year-over-year and sequential basis. Fiscal fourth-quarter sales are likely to grow year over year in the mid-single digits.

Oxford Industries is an apparel company, which designs, sources, markets and distributes products bearing the trademarks of its owned and licensed brands. It currently has a Zacks Rank #2 (Buy). OXM has a trailing four-quarter earnings surprise of 99.7%, on average. You can see the complete list of today’s Zacks #1 Rank (Strong Buy) stocks here.

Vail Resorts, an operator of mountain resorts and urban ski areas in the United States, presently has a Zacks Rank #2. MTN has a trailing four-quarter earnings surprise of 1.4%, on average.

The Zacks Consensus Estimate for Vail Resort’s current financial-year sales and earnings suggests growth of 31.9% and 168.4% from the year-ago period’s reported numbers, respectively.