Including one-time items, Fortuna Silver reported earnings of 1 cent per share in the quarter under review compared with 9 cents in the year-ago quarter.

Fortuna Silver’s revenues improved 39% year over year to $167.5 million in the quarter under review. Consolidated realized prices were $1,870 per ounce and $22.62 per ounce for gold and silver respectively in the quarter.

All-In Sustaining Cost (AISC) per ounce of gold sold was $1,151 for the Lindero Mine and $1,565 for the Yaramoko Mine. AISC per silver equivalent ounce of payable silver sold came in at $15.41 and $18.19 for the San Jose Mine and Caylloma Mine, respectively.

Fortuna Silver ended the second quarter of 2022 with around $116 million of cash and cash equivalents compared with $107 million held at the end of last year’s comparable quarter. Total liquidity as of Jun 30, 2022, was $136.1 million. Net cash flow from operating activities was $47.4 million in the quarter compared with $29.5 million in the prior-year quarter.

Per management, Séguéla construction is 66% complete as of the end of June. It is on track for the first gold pour in mid-2023. 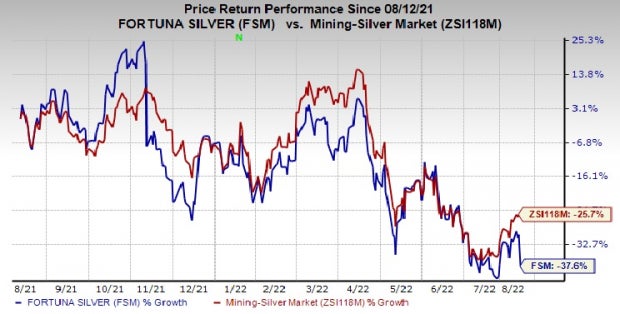 Shares of Fortuna Silver have fallen 37.6% in a year compared with the industry’s decline of 25.7%.

ATI, currently sporting a Zacks Rank #1 (Strong Buy), has a projected earnings growth rate of 1,069.2% for the current year. The Zacks Consensus Estimate for ATI's current-year earnings has been revised 12.5% upward in the past 60 days. You can see the complete list of today’s Zacks #1 Rank stocks here.

ATI’s earnings beat the Zacks Consensus Estimate in the last four quarters. It has a trailing four-quarter earnings surprise of 128.9%, on average. ATI shares have surged 56% in a year. You can see the complete list of today’s Zacks #1 Rank stocks here.

Albemarle’s earnings beat the Zacks Consensus Estimate in each of the trailing four quarters, the average being 20%. ALB has gained roughly 12% in a year and has a Zacks Rank of 1 at present.

ASH’s earnings beat the Zacks Consensus Estimate in three of the trailing four quarters and missed the same once. Ashland has a trailing four-quarter earnings surprise of 1.82%, on average. Its shares have been up around 23% in a year.