Wheaton (WPM) to End Silver Stream at Yauliyacu Mine

Wheaton Precious Metals (WPM - Free Report) has agreed to terminate its silver stream at Glencore plc’s (GLNCY - Free Report) Yauliyacu Mine in Peru for a cash payment of $150 million.  Since 2006, WPM has generated a cash flow of more than $485 million from the stream, which combined with the termination payment, will yield an absolute return of more than 220% of its original investment.

This move will help Glencore facilitate the sale of the Yauliyacu Mine, which is expected to close by the end of this year, subject to other customary conditions.

On Mar 23, 2006, Wheaton International had entered into a precious metals purchase agreement ("PMPA") with Glencore and its subsidiary Anani Investments Ltd for an upfront consideration of $285 million. The deal entailed WPM’s acquisition of an amount equal to 100% of the payable silver produced at the Yauliyacu mine up to a maximum of 4.75 million ounces per year for a period of 20 years for $3.90 per ounce of silver (subject to an annual inflationary adjustment).

On Nov 30, 2015, the tenure of the agreement, earlier set to expire in 2026, was extended to the life of mine. Also, effective Jan 1, 2016, Anani agreed to deliver to WPM a per annum amount equal to the first 1.5 million ounces of payable silver produced at the Yauliyacu mine and 50% of any excess. The price paid for each ounce of silver delivered under the agreement was increased by an additional $4.50 per ounce plus 50% of the excess (if the market price of silver exceeded $20), to a maximum of $40.

In March 2020, Glencore had put the Yauliyacu mine on care and maintenance work in response to the Peruvian emergency decree related to the COVID-19 pandemic. The national government issued a decree on May 3, 2020, whereby large mines will be allowed to reopen contingent on the approval of certain protocols. Yauliyacu had resumed operations in the third quarter of 2020 and has remained active ever since. In 2021, WPM’s attributable silver extracted from the mine was 1.963 million ounces followed by 2.12 million ounces in 2022. So far this year, WPM’s attributable silver output has stood at 1.393 million ounces at the pit.

Last month, Wheaton entered into an agreement with Hecla Mining Company (HL - Free Report) to terminate its existing silver stream at Alexco Resource Corp.'s Keno Hill Silver property for $135 million. The termination is conditional on the completion of Hecla's acquisition of Alexco. WPM will have a 5.6% shareholding interest in Hecla’s shares after the Keno Hill silver stream deal ends. 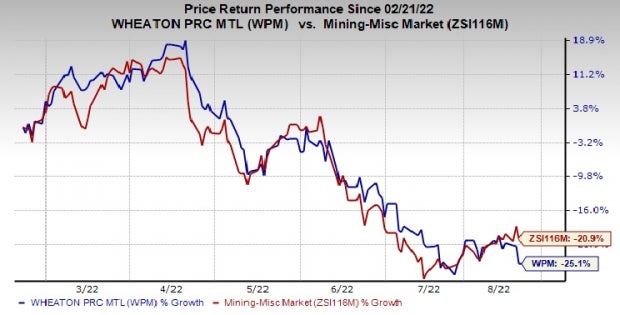 Its shares have declined 25.1% in the past year compared with the industry’s fall of 20.9%.