Aeglea BioTherapeutics (AGLE - Free Report) submitted a marketing authorization application (“MAA”) to the European Medicines Agency (EMA), seeking approval for its lead candidate, pegzilarginase, for treating patients with Arginase 1 Deficiency (AGR1-D). The MAA has been validated by the EMA.

ARGN1-D is a rare progressive disease characterized by high levels of the amino acid arginine in the body, that presents in early childhood. The disease is characterized by developmental delay, seizures, intellectual disability as well as early mortality.

Pegzilarginase is a recombinant human arginase 1, engineered to enzymatically degrade arginine in the human body to normalize arginine levels in patients with ARG1-D.

The MAA for pegzilarginase was submitted by Aeglea’s commercialization partner in Europe and the Middle East, Immedica Pharma AB.

Additionally, AGLE has already submitted a biologics license application (“BLA”) to the FDA in April, for use of pegzilarginase in the treatment of ARG1-D in the United States.

Shares of Aeglea witnessed a massive surge of 80% during market hours on Aug 19, post the announcement of the news. However, the stock has declined 89.8% in the year-to-date period, compared to the industry’s decline of 20%. 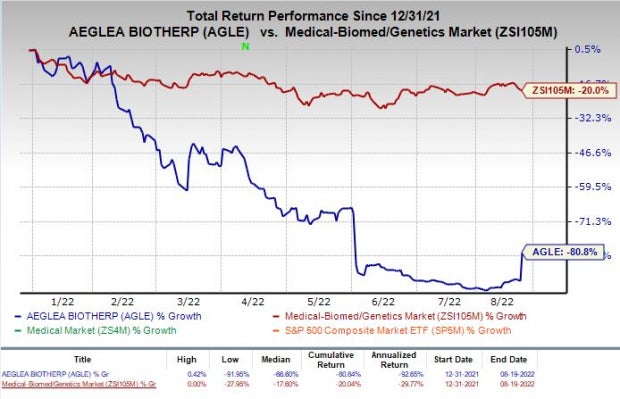 Results from these two studies have exhibited that pegzilarginase can rapidly and sustainably reduce arginine levels in the body, showing improvements in measures of mobility among patients.

Potential approval of pegzilarginase will provide Aeglea with its first marketed drug and the patients with a drug option.

Earnings of Inozyme missed estimates in three of the trailing four quarters and beat the same on the remaining one occasion. The average earnings surprise for INZY is 6.65%.

Earnings of Rhythm missed estimates in two of the trailing four quarters and beat the same on the remaining two occasions. The average earnings surprise for RYTM is 2.97%.

Earnings of Pliant beat estimates in two of the trailing four quarters, were in line in one quarter and missed the same on the remaining occasion. The average earnings surprise for PLRX is 0.90%.