Considering the rapid adoption of hydrogen-fueled electric vehicles in California, with the state’s goal of getting 1.5 million zero-emission vehicles on California roads by 2025, the H2 SilverSTARS project, on completion, should see strong demand for its product.

Utility of the H2 SilverSTARS Project

In recent times, hydrogen-powered fuel cell electric vehicles have been playing a crucial part in promoting clean energy and reducing greenhouse gas emissions in the transportation sector, not only in the state of California but the entire country. The high cost of transporting hydrogen has been a big problem with rolling out fuel cell vehicles.

Moreover, the STARS technology used in this plant utilizes a combustion-free process so that it produces fewer greenhouse gas emissions compared to a conventional steam methane reforming process.

Further, SoCalGas has set up the H2 SilverSTARS generation facility at SunLine Transit Agency, which has been a dedicated promoter of green energy in public transportation since 1993. Notably, SunLine Transit Agency is currently on track to be fully transitioned to zero emissions by 2035 – five years ahead of the deadline set in California’s ICT Regulation. No doubt the latest hydrogen generating project set by Sempra will aid SunLine in duly achieving this goal and we expect to see the setting up of more such generation facilities by Sempra in collaboration with SunLine.

Sempra, being a prime renewable energy promoting utility provider in this state, thus enjoys abundant opportunity to take advantage of this situation and has thus has been taking notable efforts to expand its realm in the hydrogen-fueled electric vehicle space. The latest establishment of the H2 SilverSTARS project is a bright example of that.

Further, earlier this year, SoCalGas announced a proposal to develop Angeles Link, a dedicated green hydrogen energy infrastructure system that could deliver clean, reliable energy to the Los Angeles basin to provide a path to decarbonize hard-to-electrify sectors such as electric generation, industries that require clean fuels and cannot currently be electrified, and heavy-duty transportation. Impressively, Angeles Link is expected to be the largest green hydrogen energy infrastructure system in the United States. Surely such efforts will strengthen Sempra’s position in the clean energy space.

Like Sempra, other utilities particularly those in the natural gas industry are also expanding their footprint in the hydrogen market.

For instance, in February 2022, Chesapeake Utilities Corporation (CPK - Free Report) announced that it had successfully blended hydrogen with natural gas to power the Company's Eight Flags Energy Combined Heat and Power (CHP) plant in Nassau County, FL. The CHP facility provides a unique opportunity to assess the feasibility and operating characteristics of blended hydrogen and natural gas in a contained and closely monitored industrial setting.

The Zacks Consensus Estimate for CPK’s 2022 sales implies an improvement of 15% from 2021’s reported figure. The stock boasts a four-quarter average earnings surprise of 10.08%.

Another utility, New Jersey Resources Corp (NJR - Free Report) , in November 2021, announced that it has placed its green hydrogen pilot project into service, making the gas utility operator the first on the East Coast to blend the zero-carbon fuel into its distribution system. The unit produces 65 kilograms per day of hydrogen, which NJR injects into an 8-inch, 60-pounds-per-square-inch distribution line.

In December 2021, Southwest Gas Corporation (SWX - Free Report) announced teaming up with the University of Nevada, Las Vegas (UNLV) and Arizona State University in Tempe (ASU) to study how hydrogen-blended natural gas can further reduce carbon emissions while still providing clean and reliable energy. An additional pilot program is being spearheaded by the Southwest Gas Hydrogen Pilot Action Team and consists of creating demonstrations based on the properties of blended hydrogen. The major milestones include using a natural gas barbecue to grill with 5% hydrogen blended gas.

In the past year, shares of Sempra have rallied 28.4% compared with the industry’s growth of 21.1%. 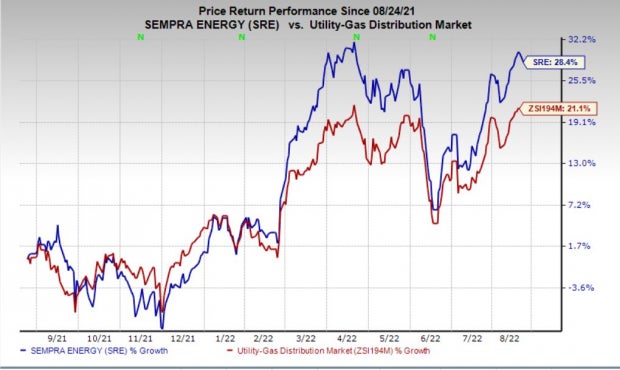