Among the list of sanctions imposed, one was called to halt all commercial and financial transactions between the Member States of ECOWAS and Mali. The only exception remained with food products, pharmaceutical products, medical supplies and equipment, petroleum products as well as electricity. Consequently, Western Union was compelled to put its money transfer services temporarily on hold only as a means to disconnect Mali from ECOWAS.

However, raising hopes, the military leaders of Mali promised to organize elections in February 2024, which prompted ECOWAS to withdraw the earlier-imposed sanctions on Mali in July 2022. Subsequently, Western Union was quick enough to connect Mali with ECOWAS by resuming its money transfer services in less than a month after the restrictions were relaxed.

Such prompt reactivation of services exhibits prudence on the part of Western Union, which aims to inflate money transfer revenues that constitute the bulk of its overall top line.

It seems that Western Union has been on a spree this August to undertake initiatives that broaden its expansive network and boost the money transfer revenues. In mid-August, WU forged an alliance with Mexico-based supermarket chain operator Alsuper to extend its money transfer services at the latter’s supermarket hubs across Northern Mexico. During the same time period, Western Union strengthened its ties with Texas-based Woodforest National Bank by offering its digital prowess in addition to the earlier available retail capabilities to the latter’s customers.

Shares of Western Union have lost 25.5% in a year compared with the industry’s decline of 25.9%. 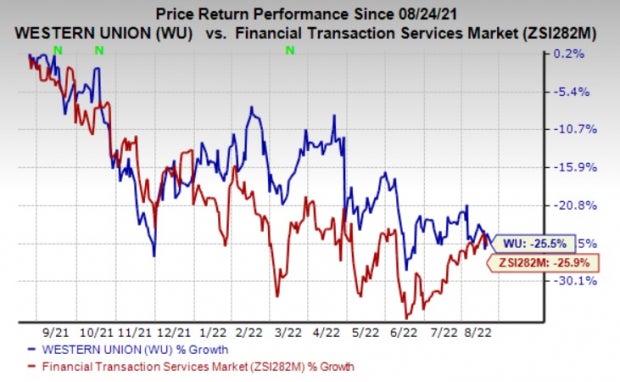 The bottom line of Automatic Data Processing outpaced estimates in each of the last four quarters, the average beat being 5.02%. The Zacks Consensus Estimate for ADP’s 2022 earnings suggests an improvement of 14.8% from the year-ago reported figure. The same for revenues suggests growth of 8.4% from the year-ago reported number. The consensus mark for ADP’s 2022 earnings has moved 3.5% north in the past 30 days.

The bottom line of Huron Consulting outpaced estimates in each of the last four quarters, the average surprise being 19.41%. The Zacks Consensus Estimate for HURN’s 2022 earnings suggests an improvement of 25.7% from the year-ago reported figure. The same for revenues suggests growth of 17.8% from the year-ago actuals. The consensus mark for HURN’s 2022 earnings has moved 2.5% north in the past 30 days.