Sorrento (SRNE) Up on Positive Result From Lung Cancer Study

Abivertinib is a novel third-generation epidermal growth factor receptor (EGFR) inhibitor being evaluated by Sorrento in a pivotal late-stage study in China.

The company reported an overall response rate (ORR) of 56.5% (118/209) in 209 evaluable NSCLC patients being treated with abivertinib. The candidate also exhibited a complete response rate (CRR) of 5.3% (11/209) and median overall survival (OS) of 28.2 months in the aforementioned patient population.

Sorrento is ending the study of abivertinib, and based on this data, it will be preparing to apply for a pre-new drug application (NDA) meeting with the FDA. The company also intends to submit documentation for the approval of abivertinib as a treatment for NSCLC to regulatory agencies of other countries as well.

Sorrento shares have declined 57% in the year-to-date period compared with the industry’s decline of 21.6%. 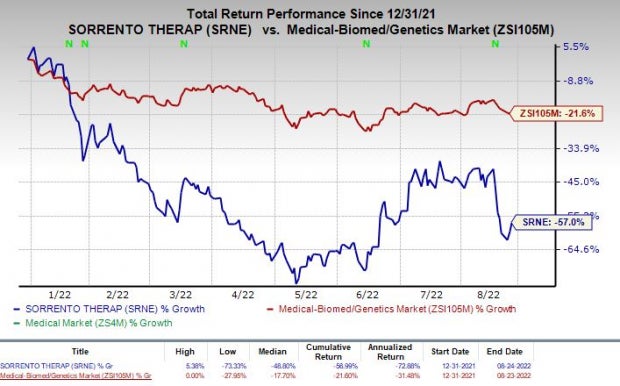 Sorrento is a clinical and commercial stage biopharma company focused on developing next generation treatments for infectious diseases, pain and cancer. The company added abivertinib to its portfolio, as a part of its ACEA Therapeutics acquisition, completed in June 2021. The acquisition significantly strengthened Sorrento’s oncology franchise.

Sorrentto also received an investigational new drug (“IND”) application clearance from the FDA, in May 2022, for evaluating abivertinib in patients with metastatic castrate-resistant prostate cancer (mCRPC) in the United States in a phase II MAVERICK study.

In March 2022, the company received FDA clearance for the commencement of phase II/III study for abivertinib in the treatment of hospitalized patients with severe pneumonia due to COVID-19. The late-stage study will be conducted at multiple sites in the United States, Brazil and Mexico.

AZN’s Tagrisso has already been approved in the United States, European Union, Japan and China as a second-line treatment option for patients with EGFR mutation-positive NSCLC.

Earnings of Inozyme missed estimates in three of the trailing four quarters and beat the same on the remaining one occasion. The average earnings surprise for INZY is 6.65%.

Earnings of Pliant beat estimates in two of the trailing four quarters, were in line in one and missed the same on the remaining occasion. The average earnings surprise for PLRX is 0.90%.