To encourage the adoption of electric vehicles (EV), the IRA includes a $7,500 tax credit till 2032 on the purchase of a new EV. Importantly, the tax credit will be sans the 200,000-car cap. In the current scenario, the tax credit phases out once a company has reached the 200,000 EV sales mark. The updated EV tax credit would remove that cap at the start of 2023. Beginning next year, the vehicles of these auto giants will again become eligible for a tax credit as long as they are manufactured in North America and meet the raw material sourcing requirements.

Green Power incurred first-quarter fiscal 2023 adjusted loss of 19 cents per share, wider than the Zacks Consensus Estimate of a loss of 9 cents. Also, the figure was wider than the year-ago quarter’s loss of 11 cents a share. Revenues surged 29% year over year to $3.85 million but missed the Zacks Consensus Estimate of $6 million. Region-wise, the United States registered revenues of $3.6 million, rising from $2.6 million in the year-ago period. The Canada unit recorded revenues of $161,450, falling from $323,900.

During the quarter, GreenPower delivered its first five 22’ cargo vans. Currently, it has nearly 40 EV Star Cargos in finished goods inventory.Cash and restricted cash at the end of the quarter was $5.4 million, down from $9.1 million at the end of the year-ago quarter. Cash flow used in operating activities was $2.4 million compared with $1.2 million in the corresponding quarter of fiscal 2022. As of Jun 30, 2022, the company’s line of credit had a credit limit of up to $8,000,000.

Ford, General Motors and BMW announced a new managed EV charging pilot program in partnership with SMUD, the sixth-largest not-for-profit electric service provider. The new charging program will save EV customers money on utility costs to promote a balanced energy grid. SMUD is a leading player in the clean energy space. It strives to reduce carbon dioxide content and aims to reach zero carbon emissions for its power supply by 2030 under its Zero Carbon Plan.

SMUD is tasked to see if the new pilot program can help Sacramento-based EV users find the optimal time to charge their vehicles during the day. Per the agreement, F, BMW and GM will create custom charge requests by providing an optimal charging schedule for EV owners to charge their vehicles in their suitable time slots. All three automakers are focused on their electrification initiatives, and thereby the venture complements their vision. 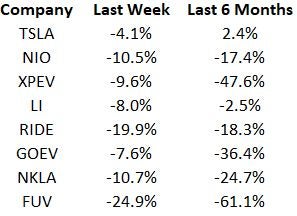