Dollar Tree, Inc. (DLTR - Free Report) has reported second-quarter fiscal 2022 results, wherein earnings beat the Zacks Consensus Estimate, while sales missed the same. The top and bottom lines improved year over year. The results benefited from the continued demand for the company’s products, offset by inflationary pressures and an unfavorable product mix due to the demand shift toward low-margin consumable goods from high-margin discretionary items.

Backed by the inflationary pressures, plans for pricing investment at Family Dollar and consumers’ shift toward consumable products, the company slashed its guidance for fiscal 2022.

Shares of DLTR declined 8.4% in the pre-market trading session on Aug 25, driven by the lower-than-expected sales in the second quarter of fiscal 2022 and a lowered view for fiscal 2022. Shares of this Zacks Rank #2 (Buy) company have rallied 18.2% year to date against the industry's decline of 11%. 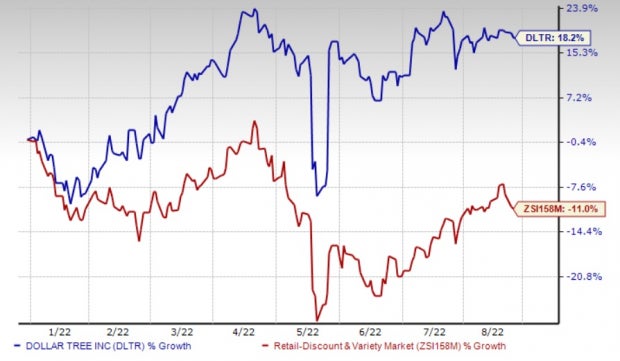 Dollar Tree’s earnings improved 30.1% year over year to $1.60 per share and beat the Zacks Consensus Estimate of $1.57. This marked record second-quarter earnings for the company. Bottom-line growth can be attributed to robust top-line growth, as well as improved margins.

Consolidated net sales advanced 6.7% year over year to $6,768.5 million but missed the Zacks Consensus Estimate of $6,785 million. Enterprise same-store sales (comps) improved 4.9% year over year on a constant-currency basis and 4.8% after adjusting for the impacts of Canadian currency fluctuations. For the Dollar Tree banner, comps were up 7.5%, while comps for the Family Dollar banner improved 2%. After adjusting for the impact of Canadian currency fluctuations, comps for the Dollar Tree banner rose 7.4%.

The gross profit increased 14.2% year over year to $2,124.4 million, while the gross margin expanded 200 bps to 31.4%. Gains from improved initial mark-on, and leverage on distribution and occupancy costs aided gross margin. This was partly negated by higher freight expenses, markdowns, shrink and unfavorable product mix related to a shift toward lower-margin consumable products. The gross margin expanded 500 bps to 37.4% at the Dollar Tree banner and contracted 140 bps to 24.7% at the Family Dollar segment.

In second-quarter fiscal 2022, Dollar Tree opened 127 stores, expanded or relocated 29 outlets, and shuttered 57 stores. The company completed the renovation of 257 Family Dollar stores to the H2 or Combo Store formats. Additionally, it expanded the multi-price plus offerings to another 697 Dollar Tree stores in the quarter. As of Jul 30, 2022, the company operated 16,231 stores in 48 states and five Canada provinces.

Dollar Tree announced plans to make competitive pricing investments in the Family Dollar chain to improve store productivity and profitability in the long run. These efforts will also allow the company to accelerate store growth in the long term. Driven by the investments and the shift of consumers’ preference to more need-based consumable goods, the company expects the gross margin to be pressured in the second half of fiscal 2022. Consequently, it lowered the earnings per share view for fiscal 2022.

The company expects consolidated net sales of $27.85-$28.10 billion compared with the $27.76-$28.14 billion mentioned earlier. It anticipates higher comps growth in fiscal 2022 to be offset by slightly reduced square footage growth compared with the prior view. The company anticipates enterprise comps growth of mid-single digits for fiscal 2022, including a high-single-digit increase in the Dollar Tree segment and positive comps in the Family Dollar segment. It expects selling square footage to increase 3.5% compared with 3.9% growth mentioned earlier.

Tecnoglass, engaged in the manufacturing and selling of architectural glass and windows and aluminum products for the residential and commercial construction industries, presently sports a Zacks Rank #1 (Strong Buy). TGLS has a trailing four-quarter earnings surprise of 24.4%, on average. You can see the complete list of today’s Zacks #1 Rank stocks here.

The Zacks Consensus Estimate for Tecnoglass’ current-year sales and EPS suggests growth of 28.2% and 47.7%, respectively, from the year-ago period’s reported numbers. Shares of TGLS have declined 5.6% year to date.

Costco Wholesale, which sells high volumes of foods and general merchandise (including household products and appliances) at discounted prices through membership warehouses, currently carries a Zacks Rank #2. COST has an expected EPS growth rate of 9.2% for three-five years. Shares of COST have declined 4.3% year to date.

The Zacks Consensus Estimate for Costco Wholesale’s current-year sales and earnings per share (EPS) suggests growth of 15.4% and 18.2%, respectively, from the year-ago period’s reported figures. COST has a trailing four-quarter earnings surprise of 9.7%, on average.

Dollar General, one of the largest discount retailers in the United States, has a Zacks Rank of 2 at present. DG has a trailing four-quarter earnings surprise of 2.8%, on average. The stock has gained 5% year to date.

The Zacks Consensus Estimate for Dollar General’s current-year sales and EPS suggests growth of 10.1% and 13.7%, respectively, from the year-ago period’s reported numbers. DG has an expected EPS growth rate of 12.8% for three-five years.