Valued at $14.7 million, the contract is expected to be completed by July 2027. Per the terms of the deal, Kratos will provide software engineering support services, including analysis, modification, and implementation of software changes for supporting the BQM-177A Subsonic Aerial Target system.

The majority of work related to this deal will be carried out in Sacramento, CA.

As of 2021-end, Kratos had been awarded production orders for 257 BQM-177A aerial targets. This, along with the latest contract win, surely reflects the solid demand that Kratos enjoys for this product line.

The rising geopolitical tensions globally have resulted in countries fortifying their defense spending to reinforce their national defense systems. This has led to a huge demand for defense products. Consequently, the effective and efficient unmanned aerial system (UAS) recorded a surge in demand over the past few years due to its applicability in the intelligence, surveillance and reconnaissance drives of military missions. Moreover, its remote controlling features encourage a zero-mortality rate.

Per a report by Fortune Business Insights, the global military drone market is projected to expand at a CAGR of 14.8% during the 2022-2029 period. This should benefit Kratos and other prominent defense majors like Lockheed Martin (LMT - Free Report) , L3Harris Technologies (LHX - Free Report) and Raytheon Technologies (RTX - Free Report) as they play a significant role in manufacturing UAS.

Lockheed Martin has been delivering advanced autonomous systems to the U.S. military and allies to meet its customers’ most-demanding missions. Lockheed Martin provided a range of unmanned technologies, ranging from the X-44 Manta prototype, the Indago 3 unmanned drone and OUTRIDER.

Lockheed Martin’s long-term earnings growth rate stands at 5.4%. LMT shares have returned 19.9% in the past year.

The long-term growth rate of L3 Harris is pegged at 3.3%. The stock boasts a four-quarter average earnings surprise of 2.16%.

Raytheon’s Coyote UAS is small, expendable and tube-launched. It can be deployed from the ground, air or a ship. The Coyote UAS can be flown individually or netted together in swarms and it is adaptable for a variety of missions, including surveillance, electronic warfare and strikes.

The long-term growth rate of Raytheon is pegged at 10.4%. RTX shares have rallied 10.1% in the past year.

In the past year, shares of Kratos have lost 42% against the industry’s rise of 4.6%. 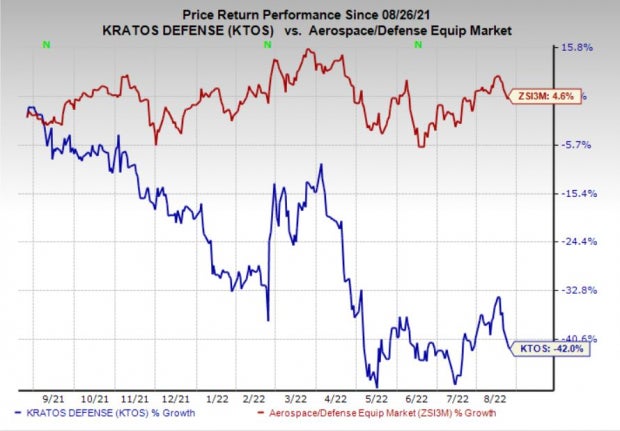