Gold Fields Limited (GFI - Free Report) announced a profit attributable to owners of the parent for the six months ended Jun 30, 2022, of $510 million (or 57 cents per share). This compared favorably with the profit of $387 million (or 44 cents per share) in the comparable period last year. The upside was aided by higher production and gold prices that helped offset the impact of rising costs.

Normalized profit (excluding gains and losses on foreign exchange, financial instruments and non-recurring items after taxation and non-controlling interest effect.) increased 16% year over year to $498 million in the first half of 2022. Normalized profit per share was 56 cents in the period under review, up from 49 cents in the first half of 2021. Headline earnings per share were 58 cents compared with 45 cents a year earlier. The same came within the guided range of 56-60 cents,

Revenues were $2,235 million in the first six-month period of 2022, up 13% from the last-year level. This improved performance was driven by a 10% increase in gold sales and a 3% gain in gold price received.

Cost of sales before amortization and depreciation was $923 million in the six months ended Jun 30, 2022, mainly due to inflationary increases across all regions, partially offset by the weakening of the Australian Dollar and South African Rand.

Gold Fields also provided an update on its pending acquisition of Yamana Gold Inc. (AUY - Free Report) , which it expects to close in mid-November, subject to shareholders’ nod at the general meetings and certain regulatory approvals. In May, GFI had announced that it entered into a definitive agreement to acquire all the outstanding common shares of AUY. The deal valued at $6.7 billion will create a top-four global gold major with a diversified portfolio of high-quality, long-life flagship assets across some of the world’s most established gold mining jurisdictions with tangible near- and long-term growth opportunities.

Over the past year, shares of Gold Fields have lost 0.4% compared with the industry’s decline of 8.5%. 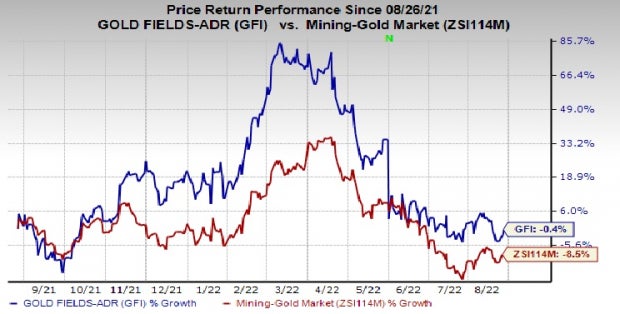 Daqo New Energy, currently sporting a Zacks Rank #1 (Strong Buy), has an expected earnings growth rate of 177.5% for the current year. The Zacks Consensus Estimate for DQ's earnings for the current fiscal year has been revised 20.8% upward in the past 60 days. You can see the complete list of today’s Zacks #1 Rank stocks here.

Daqo New Energy’s earnings beat the Zacks Consensus Estimate in three of the trailing four quarters, while missing on one occasion,  the average beat being 10.8%. DQ has gained around 28% over a year.

Chemours has a projected earnings growth rate of 40% for the current year. The Zacks Consensus Estimate for CC's current-year earnings has been revised 7.3% upward in the past 60 days.

Chemours’ earnings beat the Zacks Consensus Estimate in three of the last four quarters. It has a trailing four-quarter earnings surprise of 28.3%, on average. CC has gained around 10% in a year and currently carries a Zacks Rank #2.