Since the announcement of the ASR, shares of BPOP have lost 1.3%.

Per the ASR Agreement, on Aug 26, 2022, Popular is expected to have made an initial payment of $231 million to receive an initial delivery of 2,339,241 shares of its common stock. This would be accounted as a treasury stock transaction.

Consequently, BPOP is expected to recognize $185 million in treasury stock and $46 million as a reduction of capital surplus in its shareholders’ equity. Further adjustments in its treasury stock and capital surplus accounts will be made upon the final settlement of the ASR agreement to reflect the final delivery or receipt of cash or shares. The final settlement is expected to occur no later than the fourth quarter of 2022.

Apart from share buybacks, the company has been focused on rewarding shareholders through dividend hikes. This February, it hiked its quarterly cash dividend by 25% to 55 cents per share. The dividend was paid out on Apr 1 to shareholders of record as of Mar 15.

This marked the fourth consecutive annual dividend hike by the company. Prior to this, Popular hiked its dividend by 12.5% to 45 cents per share in May 2021. We believe that such disbursements highlight the company’s operational strength and commitment to enhancing shareholder value.

Over the past three to five years, Popular witnessed earnings growth of 36.4%, higher than the industry average of 13.6%. Though the company’s earnings are expected to decline 5.8% this year, the same is expected to bounce back and grow 2.7% in 2023.

The company’s revenues witnessed a compound annual growth rate of 7.9% over the last five years (ended 2021). Given a strong balance sheet position, the company is expected to expand into lucrative businesses. Further, it evaluates its branch network and realigns business per customer needs.

As of Jun 30, 2022, the company had total debt worth $959.1 million, and cash and cash equivalents of $528.6 million. Thus, given a robust liquidity position and decent earnings strength, the company’s capital deployment activities are likely to remain sustainable.

Over the past six months, shares of the company have lost 8.2% compared with the industry’s decline of 1.7%. 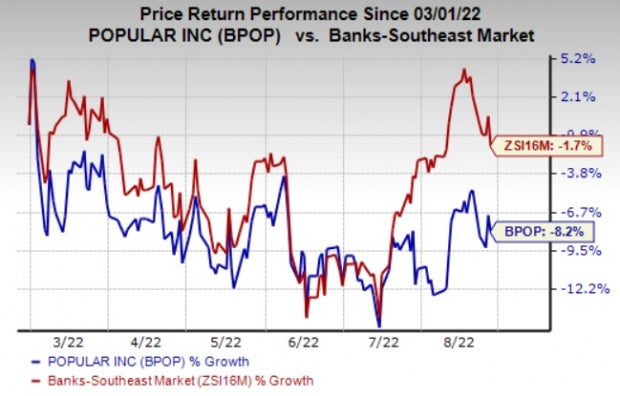 This July, SCHW announced a new share repurchase program worth up to $15 billion. This replaced the prior plan, which had a $1.8-billion authorization remaining as of Jun 30, 2022.

A couple of days ago, Bridgewater Bancshares, Inc.’s (BWB - Free Report) board of directors announced a new stock repurchase program. Under the plan, the company is authorized to repurchase up to $25 million worth of its common stock. The program will expire on Aug 16, 2024.

The share repurchase program is part of BWB’s strategic decision to enhance shareholders’ value. Prior to this program, in January 2019, Bridgewater Bancshares adopted a stock repurchase program, which authorized the buyback of up to $15 million worth of its common stock. The program was changed twice to increase the share buyback authorization to up to $40 million in 2020.