Catalent (CTLT) Stock Down Despite Q4 Beat: Will it Recover?

The stock price decline was likely due to lower-than-expected revenues during the fourth quarter. However, revenues grew 10.5% year over year.

Catalent expects its revenues for fiscal 2023 within $4,975 million-$5,225 million, implying growth of 5.6% at the midpoint of the guided range. However, the guided range was below the Zacks Consensus Estimate of $5.28 billion for the same period. The lower-than-expected revenue guidance is also likely to have fueled the decline in the company’s shares yesterday.

Shares of Catalent have declined 9.6% in the past six months compared with the industry’s decrease of 11.6%. 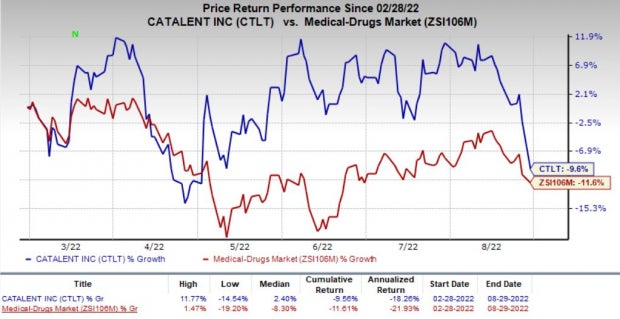 Although Catalent announced lower-than-expected revenues for the fourth quarter and a disappointing revenue guidance for fiscal 2023, the company expects its revenues to grow organically by 8% to 10% over the long run. The pronounced seasonality for its COVID-related product revenues is a key reason for the lower guided range. Better-than-anticipated demand for COVID-related products in any period during fiscal 2023 may result in higher top-line growth for the company. Apart from COVID-related revenues, Catalent’s non-COVID business also has strong growth potential, which is expected to grow organically by more than 25% at constant currency year over year during fiscal 2023.

The company reported a contraction of 151 basis points year over year in its adjusted operating margin, reflecting inflationary pressure. However, expansion of gross margin buoys optimism. The current inflationary headwind is likely to continue in the second half of the calendar year 2022. It is likely to continue to hurt Catalent’s operating margin in the next couple of quarters. However, an improving gross margin may help the company to support its net margin.

Catalent used a significant amount of its cash during fiscal 2022 to support its operations amid rising costs of materials, freight and labor. Its debt also increased during the period by nearly a billion dollars. This indicates an increase in leverage to fund its operations. Although these developments raise solvency concerns currently, the company’s projected growth for revenues and earnings is likely to result in smooth operations over the longer term.

These developments indicate that investors should add Catalent to their watchlist and track the company for any improvement in the revenue growth rate and easing of inflationary pressure in the upcoming months. Any improvement in these metrics may lead to an upside in the stock price going forward.

Currently, Catalent carries a Zacks Rank #3 (Hold), which indicates in-line returns from CTLT shares relative to the market in the next few months. The company currently has a VGM Score of B, reflecting that the stock may be currently undervalued. The financial health and growth prospects of CTLT, demonstrate its potential to outperform the market. It currently has a Growth Score of C.

Moreover, the estimates for the company’s adjusted earnings for fiscal 2023 have improved by 0.2% in the last 30 days to $4.21 per share.

AMN Healthcare has an estimated long-term growth rate of 3.2%. AMN’s earnings surpassed estimates in the trailing four quarters, the average surprise being 15.7%.

Bio-Rad has a historical earnings growth rate of 31.2%. BIO’s earnings surpassed estimates in each of the trailing four quarters, the average surprise being 46.8%.

McKesson has an earnings yield of 6.8% compared with the industry’s 4.4% yield. MCK’s earnings surpassed estimates in three of the trailing four quarters, the average surprise being 13%.