Qinlock has also been approved in Europe for the treatment of fourth-line GIST, which is already generating incremental sales for the company.

The initial uptake of Qinlock has been strong since its approval in May 2020. In the first six months of 2022, Qinlock generated net sales worth $60.3 million, reflecting an increase of 43.5% year over year. The drug contributes the majority of Deciphera’s revenues.

DCPH is also working to expand the label of Qinlock for the larger commercial opportunity in GIST. A potential label expansion for other indications will make the drug eligible to treat a broader patient population and drive sales further in the days ahead.

Shares of Deciphera have rallied 61.3% this year against the industry’s decline of 23.6%. 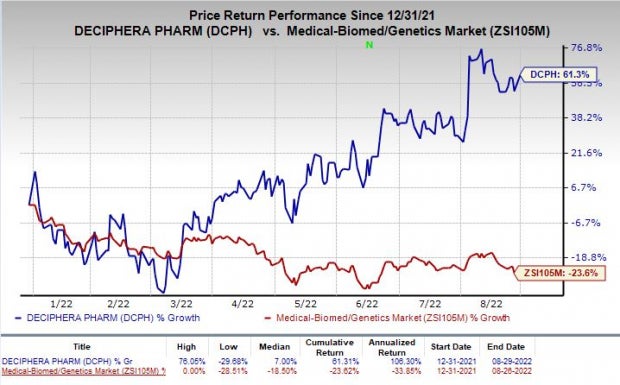 In late November 2021, Deciphera entered into a corporate restructuring, whereby the company decided to streamline its commercial operations and reduce its current workforce by approximately 35%, or almost 140 positions. The changes in the clinical development programs and restructuring efforts are expected to bring a significant reduction in the company’s operating expenses.

This apart, Deciphera has a diverse pipeline and is advancing multiple drug candidates in various stages of clinical development.

The company is evaluating vimseltinib in the phase III MOTION study for the treatment of patients with tenosynovial giant-cell tumors, who are not amenable to surgery.

A phase I study is evaluating DCC-3116 as a single agent and the company is also planning to initiate three phase early-stage studies on DCC-3116 in combination with FDA-approved MEK inhibitor, trametinib, binimetinib as well as sotorasib, an FDA- approved KRASG12C inhibitor, for treating patients with advanced or metastatic solid tumors in the second half of 2022.

The successful development and potential approval of these candidates will be a big boost for the company and is likely to reduce its heavy dependence on Qinlock for revenues.

On the flip side, Deciphera currently has no approved product in its portfolio other than Qinlock. All of its candidates, including vimseltinib and DCC-3116, are still some time away from commercialization. As a result, the company is heavily dependent on Qinlock for growth. Any regulatory setback for the drug will hurt the company’s prospects.

Qinlock also faces competition from Blueprint Medicines’ (BPMC - Free Report) Ayvakit, which is approved for the treatment of unresectable or metastatic GIST, harboring a PDGFRA exon 18 mutation, including PDGFRA D842V mutations in adults.

Earnings of Achilles Therapeutics surpassed estimates in three of the trailing four quarters and missed on the remaining occasion. ACHL delivered an earnings surprise of 12.45%, on average.

Earnings of Atara Biotherapeutics surpassed estimates in three of the trailing four quarters and missed on the other occasion. ATRA delivered an earnings surprise of 4.83%, on average.

Reasons Why You Should Retain ResMed (RMD) Stock For Now