Despite the ongoing macroeconomic challenges, continued momentum in its core brands — Calvin Klein and Tommy Hilfiger — remained upsides. However, the North America unit was drab due to supply-chain issues.

That said, management remains on track with its PVH+ Plan, which aims at product strength and consumer engagement, direct-to-consumer, digital enhancement and improving its supply-chain capabilities, which are likely to result in substantial cost efficiencies and better productivity.

In sync with its plans, PVH intends to reduce 10% of its workforce in its global offices by the end of 2023. The move will generate savings of more than $100 million, which will then be reinvested in digital, supply chain and consumer engagement related to the PVH+ Plan.

In a recent development, the company announced the departure of its existing chief executive officer, Trish Donnelly. For the time being, Stefan Larsson will act as its interim CEO.

In the fiscal second quarter, revenues fell 8% year over year to $2,132 million. The top line also lagged the Zacks Consensus Estimate of $2,226 million. This can be attributable to strength in international businesses, particularly in Europe and Asia.

On the flip side, the exit from the Heritage Brands Retail business and the impacts of the Ukraine war, including the shutdown of stores in Russia, the cessation of wholesale shipments to Russia and Belarus, and reduced wholesale shipments to Ukraine, remained concerns. Supply-chain headwinds in North America acted as another deterrent.

Direct-to-consumer revenues fell 5% year over year in the quarter, while Wholesale revenues plunged 11%. Revenues in the digital channel declined roughly 7% in the quarter under review.

The company's gross profit amounted to $1,118.6 million, down 10% year over year. The gross margin contracted 50 bps to 57.2%, including unfavorable currency impacts of 40 bps.

Adjusted selling, general and administrative expenses decreased 2.6% year over year to $1,019.9 million. Adjusted earnings before interest and taxes totaled $211.4 million compared with $293.9 million in the prior-year quarter. This mainly resulted from reduced expenses in the prior-year period due to store closures in certain regions. The metric also included $29 million of adverse foreign currency impacts.

The Heritage Brands segment's revenues plunged 44% year over year in the quarter under review.

PVH Corp ended the quarter with cash and cash equivalents of $699.3 million, long-term debt of $2,155.5 million, and stockholders' equity of $5,206.4 million. The company also bought back $124 million of shares under its existing $3-billion share repurchase program in the quarter under review.

Management lowered its fiscal 2022 outlook and issued the fiscal third-quarter view. The updated guidance reflects impacts of lower demand due to inflation and reduced discretionary expenses, along with higher promotions due to higher inventory. Also, unfavorably currency impacts, along with an uncertain macroeconomic environment, including supply-chain and logistics disruptions, inflationary pressures, the Ukraine war, and the COVID-19 pandemic impacts, remain concerning.

For fiscal 2022, revenues are anticipated to decrease 3-4% year over year (up 3-4% on a cc basis), down from the earlier mentioned 1-2% increase. This is inclusive of a 2% reduction each for the exit of the Heritage Brands Retail business and the war in Ukraine.

The bottom line is expected to be $8.00 for the year, down from $9.20 per share mentioned earlier. Notably, the company reported $10.15 on a non-GAAP basis, in the prior year. The fiscal 2022 operating margin is likely to be 9%, down from the earlier mentioned 10%.

For third-quarter fiscal 2022, management expects a 4-5% year-over-year revenue decline. This is inclusive of a 2% decline from the war in Ukraine. The bottom line is likely to be $2.10-$2.15. Notably, the company reported $3.89 and $2.67 on a GAAP and non-GAAP basis, respectively, in the year-ago quarter. This includes unfavorable currency impacts of 35 cents, as well as 18 cents of adverse impacts of the Ukraine war. 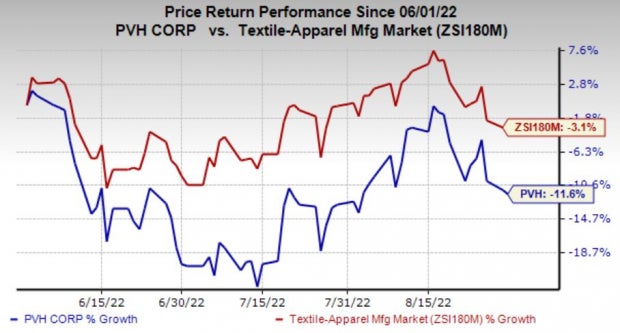 In the past three months, this Zacks Rank #4 (Sell) stock has plunged 11.6% compared with the industry's decline of 3.1%.

Target Hospitality is a builder, owner and operator of customized housing communities for hospitality solutions. It currently flaunts a Zacks Rank #1 (Strong Buy). TH has a trailing four-quarter earnings surprise of 135.3%, on average. You can see the complete list of today’s Zacks #1 Rank stocks here.

Prestige Consumer Healthcare, a developer, manufacturer, marketer, seller and distributor of over-the-counter (“OTC”) healthcare and household cleaning products, presently has a Zacks Rank #2. PBH has a trailing four-quarter earnings surprise of 5.6%, on average.

The Zacks Consensus Estimate for Prestige Consumer’s current financial-year sales and earnings suggests growth of 3.5% and 3.7% from the year-ago period’s reported numbers, respectively.