Toyota (TM) to Invest $2.5B More in North Carolina for Batteries

In December 2021, Toyota, in partnership with Toyota Tsusho, set up the new battery plant in North Carolina worth $1.29 billion to expand its hybrid and electric vehicle (EV) efforts. The investment was made by the new Toyota Battery Manufacturing company, the same one to make the latest investments.

Toyota noted that the new plant will commence production in 2025. It was a landmark for TM as the plant will steer the auto magnate’s U.S. journey of EV manufacturing. It will initially supply lithium-ion batteries for 800,000 vehicles annually.

It was also reported back then that the state would reimburse Toyota for up to $79.1 million over 20 years, and if the firm expanded the project to $3 billion, it could receive up to an estimated $315 million. Also, Toyota had said that the North Carolina plant intends to eventually expand to at least six production lines for up to 1.2 million batteries annually.

The prior investment was part of the larger investment pool of nearly $3.4 billion that Toyota announced in October last year to bolster automotive battery development and production through 2030 in the United States.

Combined, TM’s total investment in the plant will now amount to $3.8 billion. The previous announcement had 1,750 jobs promised, and after the latest one, 350 more jobs are likely to be added.

The latest investment forms part of a wider investment of up to $5.6 billion in battery production in Japan and the United States. Last year, the auto giant earmarked a global investment of nearly $70 billion for electrification efforts. With the current development, it looks like the automaker is quite determined in its mission.

It has also been announced that the company would focus on ramping up the combined battery production capacity in the two countries by as much as 40 gigawatt hours.

Apart from investing in the Toyota Battery Manufacturing plant, nearly $3 billion will go into investments in Japan.

Major economies and auto players are scrambling to reduce the environmental footprint and shift to sustainable solutions for road transportation. Data released by the International Energy Agency also suggests a booming demand for EVs, sales of which were reported to hit 6.6 million in 2021. In the first quarter of 2022, EV sales totaled a whopping 2 million, a 75% increase from the first three months of 2021.

Also, the Inflation Reduction Act in the U.S has spurred automakers worldwide to move operations to the United States.

The act, which was recently signed into law, intends to enhance EV capabilities by providing manufacturers with $40 billion in tax credits and stating that EVs eligible for such credits should be made with more American-made parts. Undoubtedly, this law has led automakers to scramble for U.S. production of electric vehicles and batteries to qualify for the incentives.

It is, therefore, natural for Toyota to intensify its efforts to make headway in the battery-electric market, especially in the United States. Recently, in a major breakthrough, the firm acknowledged California’s authority to set its own auto emission standards under the U.S. Clean Air Act. This ends a stalemate that dates back to the Trump administration.

Through the move, Toyota has ensured itself a solid ground in the United States as it can now enjoy the tax incentives accruing from the new act.

Moreover, the investments are sure to augur well for its long-term prospects in the EV space and give it scope to make a mark for itself in this area of stiff competition as automakers worldwide jostle for top positions.

Shares of Toyota have lost 15.2% over the past year compared to its industry’s 31.9% decline. 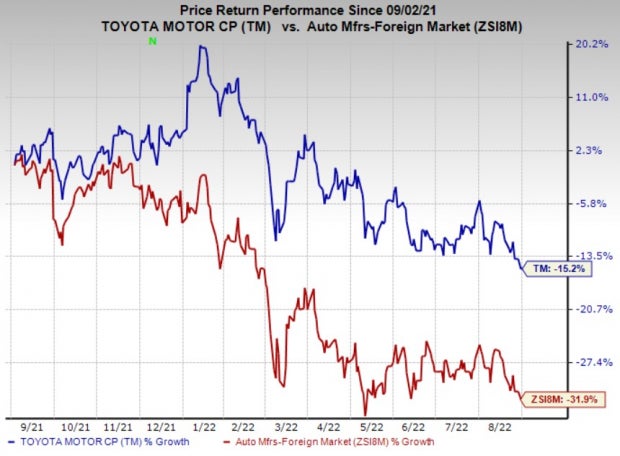 LCI Industries has an expected earnings growth rate of 68.1% for the current year. The Zacks Consensus Estimate for current-year earnings has been revised 1.3% upward in the past 30 days.

LCI Industries’ earnings beat the Zacks Consensus Estimate in all the trailing four quarters. LCII pulled off a trailing four-quarter earnings surprise of 26.48%, on average. The stock has declined 17.9% over the past year.

BorgWarner has an expected earnings growth rate of 2.9% for the current year. The Zacks Consensus Estimate for current-year earnings has been revised 5.2% upward in the past 30 days.

BorgWarner’s earnings beat the Zacks Consensus Estimate in all the trailing four quarters. BWA pulled off a trailing four-quarter earnings surprise of 29.45%, on average. The stock has declined 11.4% over the past year.

T-Mobile (TMUS) and Facebook Introduce Canva Pro in the US