In May, Sorrento-owned Scilex received an FDA clearance to initiate a double-blind, placebo-controlled phase II study of SP-103 (lidocaine topical system) 5.4% for acute LBP. The company intends to complete the ongoing study by the first quarter of 2023. Based on the phase II results, the phase III study of the candidate will be planned.

According to a report by the Centre of Disease Control and Prevention(CDC), the most common type of pain reported by patients in the United States is LBP. It is estimated that nearly 25% of adults in the United States suffer from acute LBP. The target market for SP-1-03 has a global market potential of reaching $10 billion by 2026.

Presently, there are no approved medicines specifically indicated for acute LBP. If approved, SP-103 can become the first FDA-approved lidocaine topical product for acute LBP. Since the target market represents a significant opportunity, the approval should bring in significant revenues for the company.

Post the announcement of the news, the stock price of Sorrento surged by 5.67% during market hours on Aug 31. However, Sorrento shares have declined 55.9% in the year-to-date period compared with the industry’s decline of 24%. 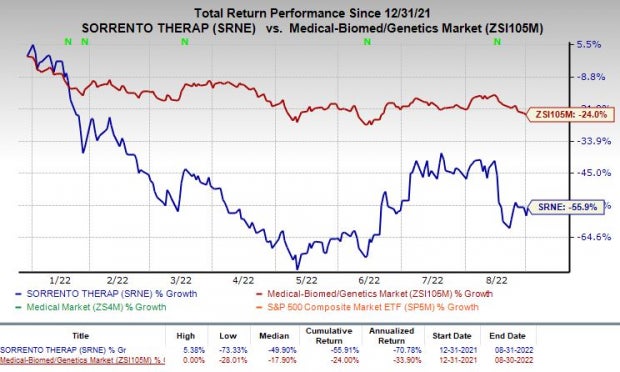 Apart from SP-103, the company’s pain portfolio consists of its FDA-approved Ztlido 1.8% for relieving pain associated with post-herpetic neuralgia (PHN).

It is also developing Resiniferatoxin (“RTX”), a naturally occurring and ultra-potent transient receptor potential vanilloid-1 agonist to reduce long-lasting noxious chronic pain symptoms. The company intends to develop RTX as a multi-indication franchise asset and is preparing the candidate for its pivotal studies evaluating it for pain associated with cancer ad moderate to severe osteoarthritis pain.

Earnings of Sutro beat estimates in two of the trailing four quarters were in line in one and missed the same on the remaining occasion. The average negative earnings surprise for STRO is 1.13%.