Shares of Howmet Aerospace (HWM - Free Report) have gained 11.3% in the year-to-date period, outperforming the industry’s 2% decrease. Recovery in the commercial aerospace end market and strength in industrial gas turbine and oil and gas end markets are driving the stock higher. 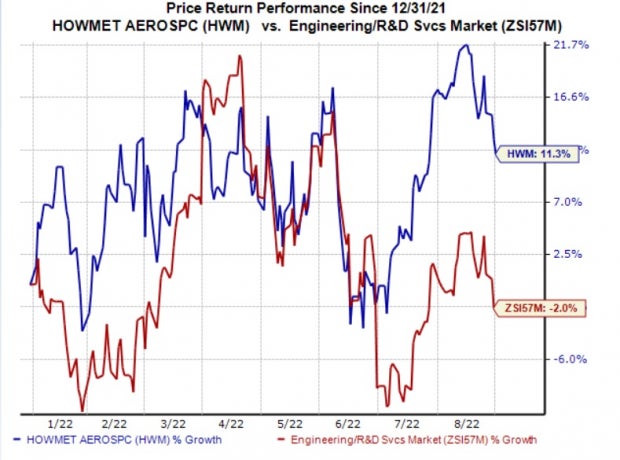 The company expects the commercial aerospace recovery to continue, backed by improvement in narrow-body production rates. This is expected to drive performance in 2022. Strength in industrial gas turbine and oil and gas end markets is likely to aid performance in 2022.

Sustained improvement in margin despite inflationary pressure also drove the stock higher. Despite raw material cost inflation, adjusted EBITDA margin improved to 27.5% in the second quarter from 23.9% in the year-ago quarter. The same improved to 27.4% in the first quarter from 24.7% in the year-ago quarter. Cost-control measures, efficiency gains and pricing actions are supporting the company’s margin performance.

Howmet carries a Zacks Rank #3 (Hold). Some better-ranked stocks within the broader Construction sector are as follows:

Arcosa has an estimated earnings growth rate of 7.8% for the current year. Shares of the company have rallied 10.9% in the year-to-date period.

Dycom Industries has an estimated earnings growth rate of 134.2% for the current year. Shares of the company have gained 20% in the year-to-date period.